Every scenario in the pack uses at least one of the included boards, but other boards are needed from various core modules published before AP1.  The scenarios tend to be large and long, but a couple of more manageable ones somehow slipped in as well.

The scenarios in AP1 were a good mix, most of them fun and well-balanced.  Quality scenarios include AP1 (The Ring), AP3 (A Breezeless Day), AP4 (L’abbaye Blanche), and AP7 (Directive Number Three).

The OBA play aid was later included, in modified form, in the 2nd Edition ASL Rulebook.  Boards 42 and 43 reappeared in 2007 as part of Action Pack 3: Few Returned.  The original Action Pack 1 scenarios are downloadable from the MMP website. 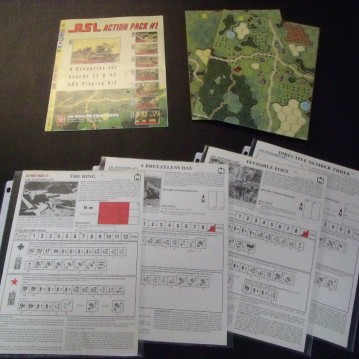