The second Action Pack saw print as one of the first ASL products printed by MMP after it received the ASL license from Hasbro.  In content, Action Pack 2 is not really different from Action Pack 1, although it does include 2 sheets of overlays.  Its overrun play aid was later included in the 2nd Edition ASL Rulebook.

Actions portrayed in the 8 scenarios come from:

Action Pack 2 has a good mix of scenarios, including the classics AP11 (Swamp Cats) and AP12 (Cream of the Crop); AP14 (Ace in the Hole) and AP15 (Broken Bamboo) are also quite good.

ASLers thought that they would see new Action Packs frequently from MMP, but they were mistaken–from 1999 to 2006 no new Action Packs were printed.  In 2007, though, another Action Pack appeared and the series happily picked up again after that. 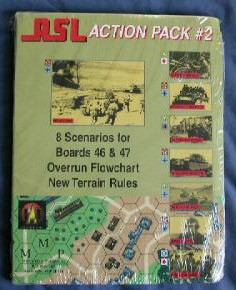