Few Returned is a bit of a novelty for MMP.  It was their first Action Pack in eight years and their first ever themed Action Pack.  However, though it has all original scenarios, unlike the first two Action Packs, it does not contain new mapboards.

Instead, the 12 scenarios (50% more than previous Action Packs) came accompanied by reprints of three older, out of print mapboards, two of which (boards 42 and 43) had been fetching an extremely high premium on E-bay.  Newer players may want Few Returned just for the maps alone (which are in the “Starter Kit” cardstock format now used for all official geomorphic maps).

The scenarios, designed by Mark Pitcavage, all depict Italian troops.   Nine of the twelve scenarios feature Eastern Front action as soldiers from the Italian 8th Army try to break out from Soviet encirclement in December 1942-January 1943.

Three more “bonus” scenarios feature German vs. Italian firefights as the Germans attempt to capture Rome on September 8-9, 1943, after the Italians signed an armistice with the Allies.

The combination of standard meat and potatoes ASL fare (the Eastern Front) and novelty (Italian troops) may be attractive to a wide variety of ASLers.

The Italian troops depicted in many of the scenarios are not the “typical” Italians of ASL scenarios, primarily because many of these scenarios feature troops from the elite Alpini (mountain) divisions, the best troops in the Italian Army.  In fact, in one scenario, a scenario featuring troops from two of the most elite battalions in the army, all Italian units are Fanatic!  However, other Italian troops are tired, hungry, cold, and demoralized.

Many of the scenarios assume a certain amount of experience on the part of players, not so much in terms of complex rules subsystems but in terms of game skill.  One scenario uses Night Rules (for only two turns, however); two scenarios have OBA; one scenario has Air Support; one scenario features Extreme Winter and Deep Snow.

The three Rome 1943 scenarios each feature one or more SSRs that depict the confused and uncoordinated nature of the Italian response to the sudden German attempt to take their capital.  In one scenario, Italian troops must take a 1PTC in order to fire on approaching German troops, until the Germans make an aggressive move.  In another scenario, the Germans can arrange a cease-fire during the scenario, causing most actions to stop  for several turns!  And in the third scenario, the Germans can get on the Italian radio network and issue a hoax order to retreat, causing Italian troops to temporarily abandon their defensive positions.  In this scenario, too, the Italians get reinforced randomly from among the many military units in Rome who were fighting the Germans without benefit of higher command or coordination.

In terms of size, most of the scenarios sit on the high side of medium or the low side of large.  About half of the scenarios fit this bill; the rest are a mix of small and medium sized scenarios.  Several seem well suited for tournament play, including AP22 (Ghost Riders) and AP23 (Agony at Arnautovo).  The shortest scenario, AP18 (Village of the Damned) is just 4 1/2 turns long and has a very Schwerpunktian feel to it.

Many of the scenarios feature interesting or intriguing tactical situations.  In AP17 (The Valley of Death), masses of Italian troops must charge up hills against Soviet defenders.  AP21 (Red Don) turns the tables, as Soviet troops must rush across a frozen river, braving enemy fire, to assault an Italian position.  In AP19 (Winter of their Discontent), the Soviets are on the attack, but prior to the game, the Italian/German player must purchase forces for a counterattack, paying for the forces with VP.  AP20 (Victory is Life) may see both sides attacking and defending at the same time, as an Italian force tries to break through Soviet lines to rescue a headquarters staff before the Soviets can destroy it.  AP23 (Agony at Arnautovo) features a Soviet attack, followed by an initiative shift and an Italian counterattack, giving both players the opportunity to attack and defend in the same scenario.  AP24 (Tridentina Avanti!) allows the Italian player to detach part of his order of battle and send it around the Soviet flank – but at varying costs in time depending on how large a flanking move is made.

Since its release,AP18 (Village of the Damned), a fast, little tournament-sized scenario with good balance, has proven to be the most popular.  Also favored are AP19 (Winter of their Discontent), AP22 (Ghost Riders), and AP23 (Agony at Arnautovo).  A few of the scenarios in the pack could have been better balanced; one can probably chalk it up to the designer’s relative inexperience as a developer, a role he also played.

Note that this product was designed by the owner of this Web site, so this commentary should be taken as descriptive only rather than as a review. 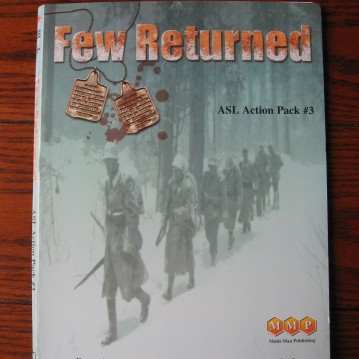