Normandy 1944 is the second, following 2007’s Few Returned, of MMP’s “new” Action Packs (the first two Action Packs were published back in the late 1990s).  Unlike Few Returned, which re-issued several long out of print geomorphic mapboards, Normandy 1944’s major selling point is its three new geoboards, the first to be created since Armies of Oblivion (and, since the AoO boards had been sold separately for many years prior to AoO’s release, in practical terms this means the first new official geomorphic mapboards seen in a large number of years).

Normandy 1944 had been in gestation for a very long period of time, but was indefinitely stalled as part of MMP’s mid-2000s ASL stagnation until Chas Argent volunteered to take over its development and see it through to completion.  As a result, ASLers owe Argent a debt of gratitude.

The theme for the Action Pack is, as its title suggests, the battle for Normandy in the summer of 1944 following the D-Day invasions.  Because of this, the new mapboards were designed with such scenarios in mind.  Two of them, 54 and 55, are obviously designed to represent hedgerow country, as the are dominated by orchards and fields enclosed by hedges.  It is still not quite what actual bocage country looked like, but it comes closer than any previous official ASL map.

Board 54 is flat, with only a single two-story house to add any elevation.  It features very rural terrain, with only a few buildings, but large numbers of hedges and orchards.   Board 55 is a bit more varied; the usual orchards and hedges are accompanied by three small, low-lying hills, a gully, and a major sunken road (bordered by hedges to add some rules-searching).  The third board, Board 53, is the only board of the three that is likely to see widespread use outside of a Normandy situation.  It features a decent sized stone village, complete with a few narrow roads, a church and cemetery, and a few rowhouses.  It is likely to be greeted with happiness by scenario designers tired of the using the existing village boards over and over again.

All of the boards, as is now standard for official ASL products, are printed in the unmounted-on-cardstock, computer-graphics-based style that debuted in the ASL Starter Kits.

A dozen scenarios (AP29-AP40, arranged chronologically) accompany the maps.  All are set in Normandy within the date range June 6, 1944, through August 20, 1944.  Most were designed by British ASLer Ian Daglish, with the remaining ones designed by MMP regulars.  Aside from the Germans, nationalities making an appearance include the United States (8 scenarios), the British (3 scenarios) and Polish (1 scenario).  Every scenario uses at least one of the new maps.

The scenarios have a decent mix of small, medium, and large actions, though few of the scenarios are particularly large or meaty.  Many of them feature a relatively small number of infantry units and a large number of AFVs.   Pretty much all the scenarios are light on SSRs and few of them use complicated rules–no scenarios have Air Support, only one scenario is a Night action, and only one scenario has OBA (and even there it is not mandatory).  As a result, Normandy 1944 might possibly have been a well suited product for novice ASL players.  What makes it somewhat less so is the emphasis on AFVs, which appear in every single scenario, often in large numbers.  And, of course, Bocage is in play in every single scenario as well.

AP30 (Not Apt to Drag Feet), one of many awkwardly named scenarios in the pack, is probably the meatiest scenario of the bunch, pitting 24 American squads and 9 AFVs in an attack against 18 German squads supported by 1 Gun and 6 AFVs.  AP32 (Second Crack at Caumont) is a good knock down, drag out village fight; as of July 2014 it was one of the most popular and most balanced scenarios in the pack.  AP34 (Bocage Blockage) and AP32 (Second Crack of Caumont) are both scenarios that have proved to be popular and balanced, as has AP40 (The Head of the Mace).

The only immediately dubious scenario is AP38 (Infiltrators), which looks too small and too gamey to be very much fun.

After a half-dozen years in the hands of players, most of the scenarios in the pack seemed to be balanced or likely balanced, with no clear dogs among them.

In addition to its “normal” content, Normandy 1944 includes some “special” content in the form of 4 replacement pages for the ASL Rulebook.  The inclusion of these pages pretty much makes purchase of this product mandatory for all ASLers who wish to have current rules.  The pages provide clarifications and examples to the Chapter B rules on Wall Advantage.  The inside cover of Normandy 1944 also includes 7 pieces of official ASL errata (which presumably will also be printed in the next ASL Journal issue printed).  The most important piece of errata is a retraction of the Bridge TEM errata issued in ASL Journal 7, which proved to be very controversial.  As a result, that rules change no longer exists and units on bridges once more suffer normal FFNAM/FFMO only, with no additional -1 TEM merely for being on a bridge.

As with its predecessor, Normandy 1944’s thematic focus means that it will offer less to people who are not interested in the theme.  People who do not like playing with Bocage Rules won’t get much out of these scenarios.  On the other hand, even for such picky people, the 3 additional maps are attractive and useful additions to the system.  For those for whom Normandy is more attractive, the Action Pack offers a variety of interesting actions and scenarios. 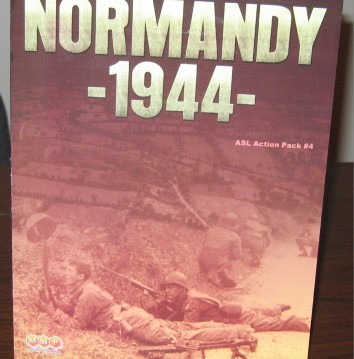