The third in the revived Action Pack series takes ASLers back to the Eastern Front (some may have never left it in the first place).  It features a dozen scenarios, all of which use one or more of three new (ASLSK-style unmounted) geomorphic mapboards.

The release of new mapboards in Action Packs 4 & 5 (and, to a lesser degree, in the ASLSKs) has provided a welcome relief to many ASLers, who have played on some of the older boards far too many times.  None of the boards in AP5 offer any truly novel additions to the ASL map milieu, but they will still be welcomed by scenario designers.  The artwork is crisp and the colors vivid.

Maps 56 and 57 are very similar, both offering light village terrain surrounded by open ground, orchards, and fields.  They can be combined together to create a somewhat larger town, which is a nice addition, although the buildings still seem more widely spaced than was the case for most European towns.  Board 58 is a large hill with two Level 3 peaks and a modicum of vegetation and a few gullies.

Half of the scenarios are large in size, and the other half medium or small.  Some of the scenarios seem well suited for tournament play, including AP41 (The Meatgrinder), though it needs the German balance; AP52 (Into Vienna Woods); and AP42 (Frontiers and Pioneers).  That last scenario also features the behemoth Soviet T-35 tank.  Meatgrinder has consistently led the pack in terms of playings.

There are no Night scenarios.  Two scenarios feature both Air Support and OBA, while two other scenarios have OBA alone.

Most of the scenarios are straight up Soviets vs. Germans, although one scenario features Romanians and another features Czech paratroopers (during the 1944 Slovak Uprising).  A third features Yugoslav partisans, although they are (reasonably justifiably) represented as Soviet troops (these units having been trained and partially equipped by the Soviets by this time).  In AP49 (Retrained and Rearmed), the units of the 2nd Czech Airborne Brigade seem to be represented as Axis Minor troops, even though they were trained and armed by the Soviet Union.

Several of the scenarios stand out as interesting in one way or another.  AP42 (Frontiers and Pioneers) gives both sides toys to play with.  The Germans get 2 flamethrowers while the Soviets get that T-35.  AP43 (Escape from Encirclement) is unusual is that it is played with the equivalent of two lengthwise boards, with a mass of Soviets trying to get across the narrow width.  The greatly outnumbered Germans nevertheless have machineguns, mortars, and artillery to stop them.  With crossing open ground a major feature of the scenario, it has something of the look of a shooting gallery for the Germans, and the scenario is likely to be dicey, even if balanced in outcomes.  AP47 (Insult to Injury) is a 1943 heavy metal combined arms action that will likely attract the attention of armor enthusiasts.

Overall, AP5 is a decent release, with a number of interesting scenarios, though some of them could have been more balanced. 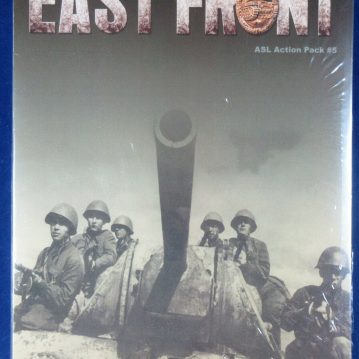