Action Pack 7 (AP7) is the latest in what passes, in ASL terms, for a flood of Action Packs in recent years, bringing new boards and new life to a geomorphic map system that had been growing stale due to a map stagnation.  Unlike several of its predecessors, AP7 is totally unthemed, hearkening back in this regard to the halcyon days of Action Pack 1 and Action Pack 2, when men were men and scenario packs presented a savory smörgåsbord of unrelated ASL actions.

All three boards (designed by ASL map gurus Don Petros and Tom Repetti) are excellent, both well-drawn and executed as well as being solid and useful additions to the ASL pantheon of boards.  Scenario designers will like the lot of them.

Board 60 is a massive city/hill board, eminently suitable for situations in Italy, Greece, Albania, Yugoslavia, and elsewhere.  The two-level hill spans almost the length of the board, and the buildings on the hill are not simply a few huts–there are some solid constructions here.  A narrow road winds its way through the town.  It is a very well-rendered board, and there is little not to like here.  The only criticism that one can offer of it is that the buildings largely end when the hill does, which makes for a less than seamless transition from this board to an adjoining urban board.

Board 61 is that wonderful comparative rarity in ASL–a wilderness board.  Indeed, it is a true wilderness board, not even a wilderness-compatible board; not a single building obstructs the beauty of nature on this map.  The board presents two level-two hills between which is a wide valley (including an actual ASL valley as part of it).  This board could be useful in a variety of situations in the Soviet Union, Finland, the Balkans, and the PTO.

The third board, Board 62, screams out for PTO.  It is wilderness-compatible–the only buildings are a few hutlike buildings that, if need be, could easily be covered by three overlays.  It is flat (level 0 terrain, plus a level -1 valley), with patches of orchards/palm trees, woods/jungle, and grain/kunai.  The boards work well as half-boards, too.  It too is a nice board.

The scenario mix skews somewhat towards the large here; about half the scenarios are large (though none are very large), with the rest divided between small and medium-sized actions.  It is still a decent mix.  No scenarios use the Night rules; one scenario uses Air Support and one scenario uses OBA.  One scenario, AP65 (Baw Drop), uses the Air Drop rules, but only for some supplies.

Three of the scenarios use some of the recently printed boards; the remaining scenarios use only the boards from AP7 and/or older boards.

Many of the scenarios feature interesting situations.  AP63 (The Nutcracker) features a Soviet attack on skis, supported by light armor, against a motley collection of German defenders with some nasty guns.  How long those guns will operate under conditions of Extreme Winter is anybody’s guess!   Unfortunately, it seems a bit hard on the Soviets.

After this winter action, players are likely to want to feel the warm sun on their backs, so a perfect way to cleanse the climatic palate is to play AP70 (Sons of Slava), a summery action featuring some heavier armor.  This fun east front late war scenario depicts another Soviet attack, with 12 squads (8 of them cavalry), supported by a T-34 and 3 SU-85s.  The Germans, who are conducting a fighting withdrawal, have 9 mediocre squads with some good MGs, as well as some mines and, to keep the Soviet armor honest, a PzJg III/IV.  A couple of Pz IVH’s join the fun later on.  To win, the Soviets must exit more VP than the Germans; however, German infantry on a particular hill also count as VP, so the Soviets have an impetus to clear the hill, too.

AP69 (Uncommon Misery) is a fun and challenging PTO scenario that takes place in Burma in 1944.  The British are on the attack in this action, and win by getting CVP and taking building hexes.  They have to amass at least 38 CVP to win, so their work is cut out for them, especially as many of the buildings are far from where they start.  However, they have a ton of guys to help them do it.  They start with 10 squads and 2 Lee tanks.  These are quickly joined by a flanking force of 8 more squads (4 of them elite), a flamethrower, and 4 Stuart tanks.  The Japanese only have 13 squads to oppose the British, more than half of them lousy 2nd-liners.  They do get 2 47L AT guns, though, as well as an interesting sniper:  on a Sniper attack dr of 3, an AT minefield is placed in the target hex; on a Sniper attack dr of 4, an AP minefield is placed.  These have the potential to affect either side, but will tend to be more of a concern for the British.  The Japanese also have the advantage that the British flanking force must come on in very open terrain and is vulnerable to taking a pounding.  The Japanese may well need to do so, because the total British firepower is pretty overwhelming.  The Japanese have to manage a fighting retreat while not losing the battle of attrition.  The good thing is they only have to hold out for 5 1/2 turns.  On limited playings on ROAR, the British may have a bit of an advantage (this writer lost as the Japanese).

Another interesting Burma scenario is AP65 (Baw Drop), which has an unusual victory conditions.  To win this scenario, the Japanese must get more VP than the Indians.  However, there are only two ways to get VP:  to capture hut hexes and to capture 5 Supply Counters that fall via Air Drop at the beginning of the scenario.  This can create a wild scenario where forces battle for the huts while reaching out for and possibly contending over various Supply counters, depending on where they land.  The Indian Chindits start off with 8.5 squads, including a flamethrower and a 9-2 leader, and get reinforced somewhat late in the game by 4 more squads.  The Japanese have three groups of troops, one elite, one first-line, and one second-line, each of which must enter the map area on one of the first three turns (Japanese player’s choice as to which group enters on which turn).  The random nature of the air drop can make this an interesting an exciting scenario.  It is very fun, but the British need the balance.

AP71 (Head in the Noose), a 7.5 turn (but smallish) scenario set in France 1944, features a Waffen SS attack, supported by a bit of armor, against a motley group of American defenders with an HMG.  An interesting SSR allows the American player, if he wants to, to reinforce his forces by choosing 1 of 2 small infantry groups and/or 1 of 2 offboard guns.  However, should the American player choose any of these reinforcements, the German player may select an equal number from his own pool of reinforcement groups.  This gives the American player a lot of interesting pre-scenario thinking to do.

Probably the meatiest scenario of the lot is AP66 (Cat’s Cradle), a 3-board 1943 East Front action depicting a German attack on a Soviet fortified position.  The attacking Germans get 22.5 squads, most of them elite, with very good leadership and a ton of MGs, plus a flamethrower and a demolition charge thrown in for good measure.  They are supported by 8 tanks (half of them Panthers) and 4 halftracks.  The defending Soviets have 13 elite squads, reasonably well led, and quite well-armed.  They start off with 2 AT guns, and get some mediocre armor support (6 AFVs) later on.  Their fortifications include 42 minefield factors, 5 Wire counters, and 5 Trench counters; they also have a module of 70mm OBA.  This is one of those “long Saturday” scenarios.

All in all, AP7 has a good set of interesting and varied scenarios, combined with some very nice maps.  For some reason, these scenarios have not gotten as much playings in the past several years as one would think they would.  This pack is worth trying. 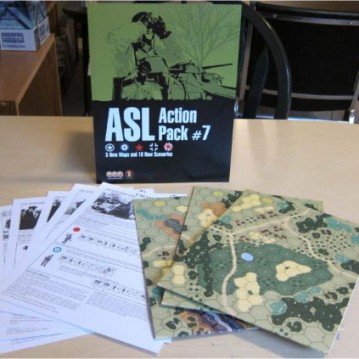