Arnhem: The Third Bridge (TTB) was one of a slew of historical modules released by Critical Hit in 1999.  Designed by Kurt Martin, it depicted the battle over Arnhem bridge in September 1944 between SS panzer units and Colonel Frost’s battalion of the British 1st Airborne Division.  Unlike some of the other 1999 releases, which had indifferent production values (particularly in terms of rules and charts, TTB was given the “deluxe” treatment, with a striking map, a well-produced rulebook, and even a sheet of diecut counters.

TTB was the second of three ASL historical modules to represent the fighting for the “bridge too far” (the others being Heat of Battle’s God Save the King, which came out first in 1994, and MMP’s A Bridge Too Far, which was released last in 1999).  Designed in the early 1990s, TTB was originally submitted in 1994 to Avalon Hill for consideration and release as an “official” ASL product.  Unfortunately, the mid-1990s were a bad time to submit anything ASL-related to Avalon Hill, as the company was undergoing considerable turmoil at the time and it was not even certain if it would continue to support ASL.  After a prolonged and no doubt agonizing period, it fell through, and Kurt Martin brought The Third Bridge to Critical Hit, where the campaign game was changed into a Platoon Leader campaign game (more or less).

TTB’s centerpiece is its map, a dark-hued, realistic depiction of Arnhem in the environs of the bridge.  It is by far the most attractive among the maps in the three different Arnhem modules.  Ironically, it is also the map which receives the most criticism, as some people claim that it is “unplayable” because many of the buildings have edges that extend slightly beyond their hexsides.  Actually, this is no problem for play at all and helps recreate the dense and constricted nature of terrain in Arnhem (with fewer opportunities for bypass).  It is one of the nicest maps ever produced by Critical Hit.

Despite its attractiveness, TTB is not played very often, perhaps because the “official” Arnhem module was released shortly thereafter and overshadowed this unofficial product.  In any case, it certainly deserves a look, especially as many of its scenarios are very reasonable in size.

A number of years after TTB’s initial release, Critical Hit released an “upgrade map” for TTB (originally created for an Arnhem ATS game), which used two mapsheets with larger hexes to represent the terrain covered in the original map (the artwork is the original artwork).

In 2007, Critical Hit released a 2nd Edition of TTB.  This edition included a single historical map, somewhat larger than the original (but smaller than the above-mentioned “upgrade map”), but did not contain a countersheet.  It did, however, include a new, ninth scenario designed by Dave Lamb.

4th Edition (Third Bridge) Comments:  At some point between 2007 and 2011, there must have been a 3rd Edition of TTB, though its nature is unknown.  However, in 2011, Critical Hit released a 4th Edition of the product, dubbed “Third Bridge” on the cover, though still called “Arnhem: The Third Bridge” in the rulebook.  That Critical Hit was just recycling the product for the sake of recycling it seems clear from the one piece of marketing type justifying its existence: the phrase “new toys and tweaks” on the cover.  The map is the same map as included in the 2nd Edition.

The 4th Edition seems to contain the same rules as before, and contains the same 9 scenarios as the previous edition.  It also includes a “free bonus scenario,” taken from an earlier Critical Hit product and used to fill up what would otherwise be the blank reverse side of a scenario card.  The scenario, CH149b (Final Embrace) is a Normandy scenario and has nothing to do with this product.  Critical Hit marketing text from its website claims that the scenarios have “optional tweaks” to them.  A comparison of the scenarios with an older version suggests that this consists nothing more than the removal of one German squad from one scenario (the largest one, where it wouldn’t seem to matter much), and the seemingly arbitrary inclusion of a couple motorcycles in one scenario and a jeep in another scenario (see below).

The 4th Edition also contains 2 duplicate sets of 2 partial countersheets.  One sheet, with 80 counters, features British SMC and MMC.  It duplicates official counters and is redundant.  The other sheet, with 56 5/8″ counters, provides some black-colored German vehicle and guns and some British vehicles and guns.  None of them seem to be new, either, except some British-colored motorcycle counters (only 8), which however are the same as all other motorcycle counters, and a jeep mounted with a machine-gun.  These latter were each arbitrarily inserted into a scenario, one presumes with no additional playtesting done.

There doesn’t seem to be any real reason to purchase this product if one has an older version–especially as this version is being sold at the outrageous price of $49.95.

5th Edition (Arnhem, “Last Word Edition”) Comments:  Everybody knows that Arnhem was home to the “bridge too far.”  Is it possible for there to be a module too far?  In 2015, Critical Hit released its umpty-umpth version of its 1990s era Arnhem module, this time renamed Arnhem and dubbed the “last word edition,” which seems a distinctly unlikely possibility, as Critical Hit’s entire business model relies on the constant recycling of its products.  The main difference between this module and the previous edition is that the map–which uses the same artwork as every previous edition–now appears printed on 6 12″ x 18″ light cardstock/heavy paper glossy map panels that must be assembled in order to use.  While the colors are bright and attractive, assembly (and keeping the maps stable) is a pain, plus the glossy finish causes glare.  The hex size had to be expanded in order to fit the map on the panels, which some will view as a plus.  The rules and scenario cards are given a new treatment, with color, and are attractive (though the rules did not receive a new layout as most other recent CH products’ rules have).  The counters provided are totally irrelevant to the game and are not needed–in fact, they were “stolen” from another CH module and simply thrown in here, presumably on the basis that modules with counters sell better.

Desperation Morale described the 4th edition of this product as outrageously priced at $49.95.  Well, hold on to your hats:  the 5th edition is priced at $69.95.  This price simply bears no relationship to the reality of this product, which does not have physical components worth that much, which incurred no design costs (those having already been paid off many years ago), and which is widely available in perfectly fine earlier formats.  There is no reason to pay this much money for this product.

6th Edition (Arnhem – Gräbner’s Charge 1944) Comments: Of course you knew that there is no such thing as a “last word” for Critical Hit, as it constantly renames and reissues its products in order to get people to purchase them all over again. So the 5th Edition was no more the “last word edition” of this product than the 2019 edition, Arnhem – Gräbner’s Charge, itself will be. But here it is.

Desperation Morale has not, as of this writing, had a chance to physically examine this particular edition of the Arnhem product, but it has some noticeable changes.  First, and most noticeably, this version of the map includes some of the terrain directly south of Arnhem bridge, in addition to the area north of the bridge.  This was apparently possible by making the hexes somewhat smaller (they had been expanded in size in the 5th Edition).  Second, the artwork of the map itself is new, replacing the original handpainted artwork that was one of the oldest surviving pieces of original Critical Hit artwork (and one of the more attractive).  The new artwork is based on the original artwork, so the same buildings are in the same positions, and so forth, but it adjusts many of the buildings to conform more to the hexgrid than the original artwork, which took some liberties with the hexgrid, did. Confusingly, the Critical Hit website claims that the new map artwork uses an “Urban palette,” by which it means that the map would have the same color scheme as Red Barricades.  Moreover, it shows a cover image of the product in which that color scheme is applied. However, as can be seen from the photos of this edition that appear on this page, that is not what the map actually looks like. It is possible Critical Hit may issue another version of it, or separate maps, that have a Red Barricades look, but one hopes not, because it is less attractive than the existing palette (and makes less sense).

This version contains only a few rules pages, so there is no campaign game. There are more scenarios than in previous editions, one of which is a monster historical scenario apparently intended to replace the campaign game.

Critical Hit also made available for purchase in 2020 something called the “Davy vs. Goliath Counterset.”  This product contains 11 historical map Arnhem scenarios (presumably drawn from the above) and some 736 die-cut counters, but no rules or maps.  Critical Hit claims they can be used with any version of the map.  The counters include British Khaki and black Waffen SS counters.  It is not clear if any of the scenarios have been changed from previous versions.  But for $79.95, apparently you can find out. 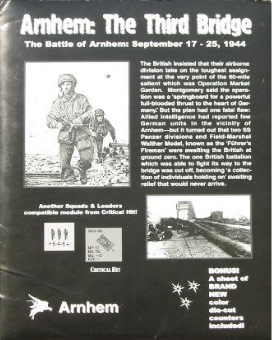