2nd Edition: Above plus Beyond Valor contents

Avalon Hill broke new ground in 1990 with the release of the first “historical” ASL module, Red Barricades (RB).  This experiment, designed by Charlie Kibler (one of the most important innovators in ASL), easily answered the question “where can ASL go after all the core modules are completed?”  Red Barricades leaves the generic geomorphic mapboards behind and takes players directly to the rubble-strewn streets of Stalingrad.  A huge, incredibly detailed 2-sheet map, derived from aerial photographs, depicts the actual terrain of the area of Stalingrad surrounding the Red Barricades factory.  The seven included scenarios allow players to move and fight in the historical Stalingrad, though somewhat stylized.  One of the scenarios, “The Last Bid,” is a true monster scenario.

It may not be too much of an exaggeration to say that Red Barricades has been the most popular ASL module ever.  There are a number of ASLers who play Red Barricades campaign games over and over, rarely venturing into other areas of ASL.  Even people not so fanatic about campaign games will surely appreciate what they have to offer.

If Red Barricades has a flaw, it is that its campaign games play fast and loose with history.  It is hard to reconcile the forces available to the players with the actual units fighting in the area at the time.  Later HASL modules had more attention to historical detail (some would argue, with correspondingly less attention to quality of play).

Red Barricades is out of print, sadly but probably not permanently.  Charlie Kibler is working on a sequel to the game, which can be played separately or mated with Red Barricades to form a humongous section of Stalingrad.  It would not be surprising if Red Barricades were reprinted to coincide with the release of the sequel, or shortly thereafter.  Many newer ASLers will be eagerly awaiting its reprinting.

2019 Update:  In 2019, MMP finally re-released Red Barricades as part of Red Factories, the sequel module referred to above.  Please see the Red Factories/Red October entry for this edition and, presumably, any future editions. 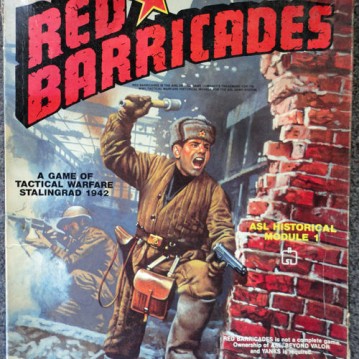