The Soviet ASL 30th Anniversary dice set is one of two sets of 5/8″ (16mm) ball-cornered custom precision dice released by Battleschool in 2015 to commemorate the 30th anniversary of the release of ASL.  This set contains two Soviet-themed dice; a second set contains two German-themed dice (for the opponents in Beyond Valor, the first ASL module).

The first die is a white die with black pips.  Instead of the normal 1-facing, the solitary pip is replaced by the Soviet solder  emblem that appeared first on the Cross of Iron boxtop and later as one of the four figures on the cover of the ASL rulebook.  The facing also contains the acronym ASL.  The 6-facing contains normal pips but also the dates 1985-2015 (the text is a bit thick and hard to read).

The second die is red, with white pips.  Its 1-facing contains a gold-foil emblem of the Order of the Patriotic War.  Its 2- and 3-facings have normal pips, but also small gold-foil ROF symbols.

Overall the dice are nice looking. 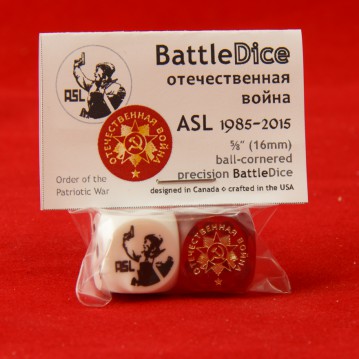