ASL Annual ’91 was the third of Avalon Hill’s series of yearly magazines devoted to ASL content.  Between the last Annual and this one, both Code of Bushido and Red Barricades had debuted, so ASLers definitely had something to celebrate.  The decreasing number of die-hard Squad-Leader-only folks had less to celebrate, as Annual ’91 finally eliminated any SL-related content.  From now on, the Annual would fully concentrate on the glory that was (and is) ASL.

Heading up the article content is a very meaty series replay of a Red Barricades campaign game (still worth reading, though Red Barricades tactics have evolved since then).  Also good is an analysis by Mark Nixon of the scenarios from The Last Hurrah.  Quality drops off after that.

The ’91 Annual is loaded with scenario content:  16 scenarios, including one for Red Barricades:  HASL A1 (Fire on the Volga).  Also included are two DASL scenarios:  DASL A7 (Lehr Sanction) and DASL A8 (Gruppo Mobile).

The “plain” scenarios, however, are the more interesting, as Annual ’91 is simply loaded with balanced, quality scenarios, including A26 (Beachhead at Ozereyka Bay), A28 (The Professionals), A29 (A Meeting of Patrols), A33 (Tettau’s Attack), and A37 (Dreil Team), not to mention two very popular classics:  A32 (Zon with the Wind) and A34 (Lash Out).

Of particular interest to some may be a group of linked scenarios by Jon Mishcon devoted to Market-Garden.  These scenarios are tournament-sized (in contrast to the typical scenarios of the time, large and longish) and come with the rules to link them for a linked-scenario campaign game.  These scenarios include A32 (Zon with the Wind), A33 (Tettau’s Attack), A34 (Lash Out), A35 (Guards Attack), A36 (Oy Veghel), A37 (Dreil Team), and A38 (North Bank).  None involve air-drops or gliders.

This is an Annual well worth getting, with a lot of play value. 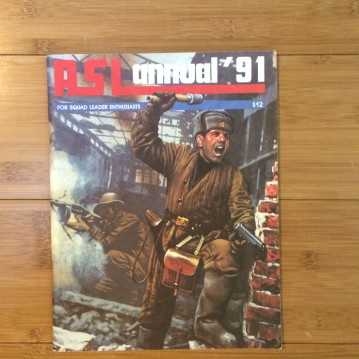