After a gap of more than three years, a new issue of the ASL Journal finally saw print again in early 2016 with its eleventh magazine (J11), bringing joy to those ASLers who wondered if they would ever see another issue again.  Though J11 contains no extras such as counters, maps or boards, it certainly does bring content, with 60 pages in the magazine and 28 scenarios included on cardstock inserts.  That’s a lot of play value.

ASL Journal Issue Ten was disappointing in that it was printed on a very thin, glossy style of paper, which made it extremely vulnerable to rips, tears, and creases.  MMP listened (somewhat) to the many ASLers who complained about the paper quality of J10 and made some changes for J11.  The paper of J11 is still coated (unlike J1-J9), but at least it is a minimally glossy coating.  Moreover, the cover was printed on a thicker stock, which will provide some protection for the magazine.  The result is not what was generally asked for–a return to the traditional style–but at least nowhere near as bad as J10.  The cover of J11 is a computer graphic depiction of an American AFV, pristine and without a speck of dirt on its surface.

The lead article in J11 is a lengthy analysis of Valor of the Guards Campaign Game IV (Savage Streets of Stalingrad), written by none other than Mike McGrath, one of the all-time great ASL players, who seems to have come out of semi-retirement for this article.  Fans of VotG will no doubt be tickled pink.  It is followed by a gameplay article by another veteran ASLer, Aaron Cleavin, advocating the use of half-squads; it will mainly be of interest to novices.  The third gameplay article, again by an experienced player, is one from J. R. Tracy on the merits of intensive fire; in a Journal full of long articles, this is the one that could have profitably been even longer than it was.

There is also a lengthy, and a bit odd, article from Jon Neall on the Gavatu-Tanambogo campaign game, which goes back and forth from offering tips or gameplay hints to rather elementary explanations (like trying to explain what huts and palm trees are!).   Another very, very long article is Jim Stahler’s set of notes for the scenario conversions of Rivers to the Reich, the last set of original Squad Leader (et al) scenarios to be converted to full ASL.  One presumes that if you were interested in those dinosaurs, then you might be interested in this article about those dinosaurs.  Others, not so much. Chas Argent contributes an analysis of one scenario, the amphibious scenario from Action Pack #11: 29, Let’s Go!

In addition to gameplay and scenario analysis articles, Journal 11 contains several commercials in article form for upcoming ASL products.  These marketing articles are designed to increase interest in future ASL products from MMP but will be obsolete once those products come out.  There is one marketing article on MMP’s upcoming Korean module and another at an upcoming East Front HASL, Slaughter at Ponyri.  A third is on a scenario pack featuring a Soviet rifle division.

Probably the best article overall is the McGrath article on Valor of the Guards.

Though there are a large number of scenarios, the number of designers is far fewer, with certain people being responsible for the majority of scenario designs, including Michael Koch, Pete Shelling, and Peter Struif (experienced designers all).  However, there are some new names as well, including Suzuki Takuya, the first Japanese ASLer to have an official ASL scenario published.

Scenarios in J11 tend towards the meaty:  about half of all the scenarios are large, with the remainder divided between small and medium-sized actions.

A number of the scenarios deserve comments of some sort or another.  J162 (African Brothers), depicts a rare Italian attack on a British fortified position and certainly looks interesting. J166 (Maximum Aggression) is one of those small tournament-sized, fast playing PTO scenarios that seem to abound in ASL.  J172 (Ramcke’s Redoubt) is a DASL scenario.

J180 (The Hour Zero), designed by Ian Daglish (who died four years ago, so this has been sitting around for a while) depicts one of those very rare situations in which enemies actually briefly fought on the same side.  In this tiny May 1945 action, British and German troops try to round up some SS stragglers unwilling to surrender.  The historical situation is interesting, but the scenario situation seems less than ideal, with the SS troops probably playing hide and seek for nine turns, or as much of that as they can.  J177 (Coup de Main at Hamminkeln) is a small Glider Landing scenario.

Fans of Festung Budapest will be pleased to see a new scenario for that module: FB19 (War Brotherhood), designed by Bill Cirillo and Sean Deller.  It depicts a large combined arms attack by Hungarians and Germans against a well-gunned set of Soviet defenders, using large sections of the NW and SW maps.

Fans of Operation Veritable will also be pleased to discover a new scenario for this older product:  HS33 (Down on the Farm).

Fans of Valor of the Guards will be doubly excited to find not one but two new scenarios for their beloved module:  VotG26 (Bad Day for the Luftwaffe) and VotG27 (Drama, the Park, and Deadly Things).

Getting ever more exotic as we go, J11 also has two three-player scenarios, a very rare breed in ASL.  The first of these is Aiding the Local Constabulary, which appears in a two-player version (J163) and a three-player version (J164).  This complicated scenario/pair of scenarios was designed by Martin Hubley and Peter Struif and takes place during the Allied conquest/liberation of Italian-held Ethiopia in 1941.  As the Italian positioned collapsed, some of its native troops revolted, causing the Italians to reach out to their opponents, white South Africans, for assistance in quelling the mutiny.  The two player version of the scenario has the Italians and South Africans as one side, and the “mutineers” on the other.

In the three-player version, Italians, South Africans and “mutineers” each have a side and all forces can fight all other forces.  It has a sequence of play similar to that of Kinetic Energy’s Dogs of War scenario.

The other three-player scenario, which comes in only one version, is J171 (Whom Gods Detroy), designed by Chris Olden. It depicts a notional three-way fight between a German force, Greek communist partisans (ELAS) and British-supported partisans (EDES).  While there were some actions that theoretically could be done as three-player scenarios from October 1943-January 1944, when civil war broke out between EDES and ELAS while both were under heavy German anti-partisan operations, by August 1944, when this scenario is ostensibly set, that conflict was over and EDES and ELAS were not really fighting each other like they had been earlier (indeed, there were even a few episodes of limited cooperation).  It was not until late 1944 that ELAS launched a second series of attacks on EDES that essentially destroyed the latter force.   This scenario, with its rather generic historical description and nonspecific location (“central Greece”), does not seem to be simulating any specific tactical action but appears to be more of an imaginary action.   EDES was located in Epirus, in any case, not central Greece.

Lastly, there are three “Squad Bleeder” scenarios (4, 5, 6), following in the footsteps of the initial three that appeared in ASL Journal Issue Ten.   The Squad Bleeder scenarios in that previous issue did not appear on scenario cards but were inconveniently printed in the magazine; J11 happily includes the new SB scenarios on cardstock inserts.  These scenarios–one French-German scenario in France 1940, one Soviet-German scenario set in Austria 1945, and one American-German scenario set in Germany in September 1944–have somewhat random map layouts and orders of battle that are largely secretly purchased.  The idea behind the scenarios is to create as much of a “fog of war” feeling in which players will not know what forces their opponents have–until they find out the hard way.  Each scenario comes with purchase charts for each side, similar to what a campaign game might have.  By their nature, they are not very suited for competitive/tournament play, but can definitely be fun.

As the reader can see, ASL Journal Issue Eleven comes loaded with a ton of stuff to explore and play and there’s got to be something for almost anyone’s taste.  It is definitely worth getting. 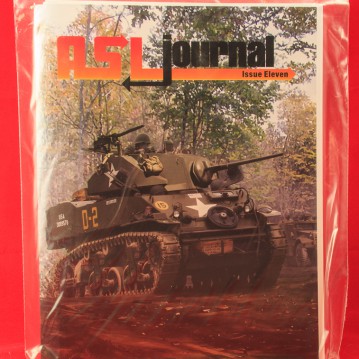