Best of Friends 2 is a reprint scenario pack, featuring selected scenarios originally published in the Friendly Fire series of scenario packs and now reprinted and re-released by MMP as official ASL scenarios.  It comes on the (distant) heels of Best of Friends, a similar effort released back in 2013.

Friendly Fire packs were created to debut each year at the Friendly Fire ASL tournament held in Linköping, Sweden. Early packs featured scenarios by Swedish ASLers Mattias Rönnblom and Martin Svärd, while later packs expanded to include actions designed by Chris Mazzei, Peter Struijf, Pete Shelling, and others.  What never changed over the years was a dedication to interesting, varied, and well-playtested scenarios. Friendly Fire has not released a pack since 2018 and it is not clear if there will be any more.

Desperation Morale has never been shy about its deep appreciation of the quality of the Friendly Fire scenario packs, so it is nice when some of those scenarios can be brought to the much wider audience of ASLers reachable by MMP.

Best of Friends 2 also reprints the one geoboard that Friendly Fire ever created, the FrFA board (now renamed as Board 85) that originally debuted in Friendly Fire Pack 6 in 2010.  It is a nondescript and not particularly interesting rural board featuring a tiny hamlet.

Despite the title of the product, this is not necessarily a “best of” collection, as scenario selection seems at least in part to focus on scenarios that use the included Board 85. Indeed, 5 of the 12 scenarios included happen to feature Board 85.  This doesn’t mean those scenarios aren’t good–most Friendly Fire scenarios are of high quality.

The scenario cards in Best of Friends 2 are printed on unusually thick cardstock.

Of the 12 scenarios in Best of Friends 2, three are small in size, four could be considered medium-sized, and another four large.  None are huge and most are tournament-suitable. One scenario uses Air Support rules; no scenarios use OBA or Night Rules.  One scenario uses Swimming rules, so break out your swim trunks and dust off your rulebook for that one.

Some of the scenarios appear to have been updated slightly from their original appearance, for errata or balance issues.

Your humble author has played and enjoyed many of these scenarios; anybody who tries this pack will likely have the same experience. 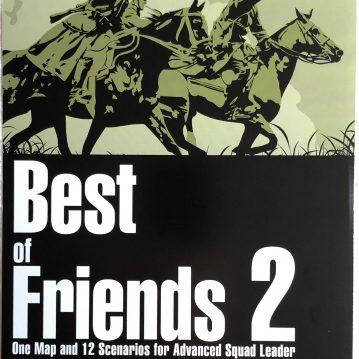