Home > Products > Beyond the Beachhead 2

Beyond the Beachhead 2 (BtB2) is both a reprint and an expansion of the original Beyond the Beachhead published by Heat of Battle half a decade earlier.   The designer, Chas Smith, had been part of Heat of Battle when the original version was published and apparently retained the rights.  BtB2, published after Smith revived his earlier Bounding Fire Productions, is essentially double the size, in scenarios and maps, as the original, and as such, BtB2 represents a significant expansion over the first version.  Unfortunately, BtB2 does not come in a box or folder or baggie, so purchasers will have to find one of their own or risk losing components.

In terms of those components, the maps are very well done, although many ASL players will dislike the fact that they all contain slopes, forcing players to use the slope rules from some HASL.  Map BFP-C depicts a stone-building village, with bocage on either side of it.  Map BFP-D contains mostly bocage-surrounded fields, with a tiny hill thrown in.  BFP-E is an odd mix of terrain, with three low hills, a cluster of bocage-surrounded fields and orchards, a fairly large swampy area, and a depression.   BFP-F is mostly open ground, with a few areas of bocage and four low hills.  Overlay H-2 is a two level hill overlay with a smattering of bocage; overlay V-2 is a 14 hex cluster of single hex stone buildings and orchards.  Overlay V-1, one of the large overlays, is a very densely-populated overlay with a stone-building village, a lot of bocage, and lot of orchards.  V-2, another large overlay, is a more open village.  Overlay H-1, also large, is a big two-level hill crammed with bocage and orchards.  The scenario cards are pretty nice, in full color (but printed on glossy cardstock).  The proofreading is pretty decent (something rare for a third party ASL product).  Sadly, the scenario cards buy into the “black SS counters are cool” notion.

BtB2 consists of 16 scenarios all set in Normandy in 1944.  The vast majority are designed by Chas Smith.  Every scenario has bocage or “light bocage.”  Every scenario uses at least one BtB2 map (with the exception of one scenario which uses only a BtB2 overlay); the majority of scenarios in the pack use only BtB2 maps.  There are no Night scenarios and none with Air Support (although one uses it as a balance).  One scenario, BtB15 (Becker’s Battery) is almost, though not quite, an all armor scenario.

The scenarios have a number of hallmarks of Chas Smith scenarios.  They tend towards the large (half of the 16 scenarios are large, the other half small or medium in size), they tend to have OBA (7 scenarios feature OBA, with many of them having multiple modules of OBA; there are also scenarios with bombardments), and they tend to have lots of support weapons.    This last point is worth a little more exploration.  The 16 scenarios of BtB2 have a total of 394 squad-equivalents (not including crews with Guns) in them, and a total of 230 SW (not including radios).  This results in a squad to SW ratio of only 1.7 to 1; in other words, more than half of the squads in these scenarios will be toting SW.  In comparison, Friendly Fire Pack 1, picked at random, has a 3 to 1 squad to SW ratio.  Actions Pack 1 and 2, also chosen randomly, cumulatively have a squad to SW ratio of 2.4 to 1.

Of the 8 new scenarios, several appear interesting.  BtB 10 (Unplanned Attack) could be an interesting tournament selection, if it proves balanced (it did not, alas; give the Germans the balance).  It features a heavily armed American force of indifferent quality attacking a small but elite German force holed up in a village.  By its nature, it may be a tad dicey, though.   BtB11 (Bosq Barbecue, an awful title), features a large British combined arms assault across a scary amount of open ground and some nasty SS defenders.  The British do have a couple of Crocodiles; if any survive, they can put the hurt to the Germans.  The most popular of the new scenarios has turned out to be the well-balanced BtB9 (Norman “D”).

Overall, the scenarios (old and new, but the new perhaps somewhat less well balanced than the original set) of BtB2 are pretty well balanced, with only a couple dogs among them.  This means that there is plenty of play value in the product.

Overall, BtB2 is an improvement over the original version, which itself was a pretty decent product. 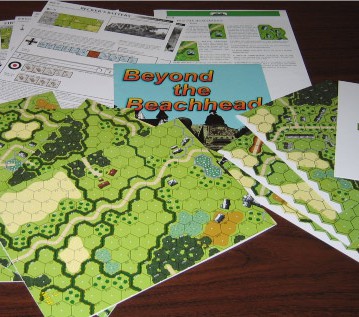