Alternative Titles/Edition History:
1st Edition (published by Heat of Battle), 2004; 2nd Edition (modified and expanded by Bounding Fire Productions), 2009.  The 2nd Edition is treated as a separate product on this website.

With Beyond the Beachhead (BtB; note the unusual absence of an exclamation mark in the title), Heat of Battle reminded ASLers why they love this third party company so much.  This highly professional and attractive product, at the heart of which are two beautifully-rendered mounted geomorphic mapboards featuring Normandy hedgerow country, recaptures the high quality high ground that Heat of Battle seized with its Onslaught to Orsha.  Interestingly, both products were Chas Smith designs.  Plagued by production problems and delays, BtB was a product many ASLers wondered if they would ever see at all.  When it finally arrived, they were delighted.

The geomorphic mapboards, courtesy of the graphic skills of Klaus Fischer, feature bocage-bordered fields as well as a small village surounded by bocage.  Two very large overlays, both designed to mate with either map, can completely transform either board.  One overlay features a town, while the other overlay features a large two-level hill also covered with bocage.  Because the maps also feature slope hexes, there are definitely some complicated line of sight issues from time to time, due to the interplay of bocage, elevation levels, and slopes.  As is the case for many ASL historical maps, the BtB maps feature a separate terrain depiction for bocage, so that it can co-exist with hedges on the same map.  BtB also introduces a new terrain type, Light Bocage (only in play by SSR), which is somewhere between a wall and bocage in nature.  BtB includes a large, full-color attractive example of Light Bocage line of sight examples.  Just as with Heat of Battle’s first scenario pack featuring mounted geomorphic mapboards, High Ground!, the maps in BtB really push the envelope of ASL maps.

The 8 scenarios unsurprisingly all take place in Normandy in June and July 1944.  One scenario is small, four are medium-sized, and three are large.  Oddly, only two “official” geomorphic mapboards, boards 4 and 11, are used in any of the scenarios.  The strangest thing that the scenarios share, though, is the very high number of support weapons in all the scenarios, especially for the Germans.  In one scenario, for example, 16 German squads have 10 machine guns.  In another, 7 1/2 German squads have 6 machine guns.  OBA (including Bombardments and Creeping Barrages) is also extremely common in this scenario pack; combined with the bocage rules, many of the scenarios may not be that well suited for beginners or novices.

In both its physical quality and in the quality of its scenarios, Beyond the Beachhead is generally a success.  It is one of Heat of Battle’s better products. 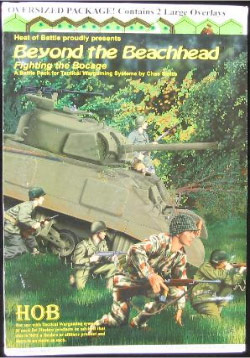