The energetic Paul Kenny released the Budapest Pack as his first scenario pack of 2007.  Presumably inspired by Krisztian Ungvary’s book (The Siege of Budapest:  100 Days in World War II) and enabled by the previous year’s release of Armies of Oblivion, Kenny designed 18 scenarios all featuring the Soviet encirclement and capture of Budapest in the late winter of 1945.

Like Fanatic Pack #4, but unlike its immediate predecessor, Balkan Warfare, the Budapest Pack features colored scenario cards and actual counter art.  Both of these features make the scenario cards more attractive.  More importantly, and what adds novelty value to this product, is the inclusion of two new geomorphic mapboards (FE1 and FE2).  The physical quality of the maps is not very good; they are printed on cardstock (the same thickness as the scenario cards), apparently by an inkjet printer.  The resolution of the maps is not very good; it would be adequate for screen resolution but in print it makes the hexgrid and other features “jaggy.”

However, it would perhaps be unfair to criticize the quality of the boards too much, because few third party publishers (let alone one-man operations) attempt to design any boards at all.  So, at the very least, Paul Kenny deserves points for effort in this regard.  Moreover, the design of the boards is good.  Of the two boards, FE1 is the more interesting.  It depicts a small Level 3 hill and a large Level 5 hill, separated by a saddle.  A village with stone buildings rests on the large hill, making the board a suitable one for many scenarios in Italy, Yugoslavia, Albania, Greece, and elsewhere.  It is a nice board and other designers should consider making use of it.

FE2 is considerably more bland.  It doesn’t have any particular theme, but seems rather a mishmash of various rural features on relatively flat terrain, with randomly scattered grainfields, woods, orchards, buildings, and brush hexes.  A gully does cross the width of the board, making it the most interesting terrain feature.

The scenarios are equally divided between Hungarian/German attacks and Soviet/Romanian attacks.  Sizewise, large scenarios predominate, with fully half of the 18 scenarios being large ones.  The rest are a mix of small and medium-sized scenarios.  Few of the scenarios feature complicated SSRs, nor do any of the scenarios utilize rare or complex ASL rules.  OBA is present in four scenarios, Air Support in one.

Most of the scenarios are meat and potatoes.  One scenario, FE148 (Breakout!), features an unusual situation.  The Hungarians start in the middle of the map with 12 squads and an assault gun and must exit 15 VP from any board edge.  The Soviets surround them with 24 squads and must prevent a Hungarian breakout.  Hand grenade laden Hungarians have a -2 CC DRM, making them pesky critters up close and personal.

Although for some ASLers, the large number of scenarios in this pack may be a selling point, for others it may not, as adequately playtesting so many scenarios is difficult for a third party publisher with access to a relatively small number of playtesters.  Some ASLers might actually view the Budapest Pack more positively if it had half as many scenarios, playtested twice as much.  Still, only time will tell the strengths and weaknesses of the product.

Since its release, only one scenario has seen any significant playing, FE150 (Blue Danube), which was probably featured in a tournament somewhere.  It seems to show up on ROAR as pretty balanced.

At the very least, Paul Kenny should be supported and applauded for making the effort of including new geomorphic mapboards in his pack.  That alone makes the pack worth trying. 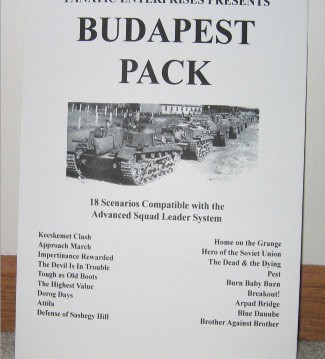