This may be one of the more legitimate re-uses of a historical map, as the original Pointe du Hoc might have daunted some with its amphibious-landing, cliff-scaling nature.  This module eliminates that whole part of the operation (as well as the 7-6-7 Army Ranger counters from Pointe du Hoc) and concentrates on inland battles with six new scenarios designed by Ray Tapio.  These include one large scenario and five small or medium-sized scenarios.

2nd Edition:  Actually the third version of the Pointe du Hoc map, the 2nd Edition Busting the Bocage was made possible through the creation of an ATS game, D-Day Rangers, which used the same map.

3rd Edition:  Critical Hit’s Web site at one point offered for sale a “3rd Edition” Busting the Bocage map, which it said was “brighter” and “has a new treatment for the German minefields.”  Supposedly it was featured in “Busting the Bocage 3rd Edition,” but only the 2nd Edition was available for sale on the Web site.  Eventually, the 3rd Edition actually appeared in late 2006 as an extra in Critical Hit Magazine Volume 7 Number 3.   It consists of a slightly reworked map and 6 slightly reworked scenarios (irritatingly, all of which were given different names).

Why does this happen?  Critical Hit has a business model which is dependent on reprinting and recycling all of its products as much as possible.  For all intents and purposes, Critical Hit only has two product lines:  its line of ASL-compatible products and its ATS line, a competing tactical gaming system.  Critical Hit creates both ASL and ATS versions of almost all of its designs, so it can get maximum value out of the same printed maps.  Critical Hit also sometimes skimps on playtesting and development, as many players have discovered over the years.  But even so, Critical Hit cannot typically release enough new products each year to sustain the company.  This causes Critical Hit to release, re-release and release yet again its previously published items.  Scenarios get recycled repeatedly, maps get recycled repeatedly–the products all get printed again and again, sometimes with real improvements, sometimes with cosmetic improvements, sometimes with little “improvement” at all.  Moreover, names of scenarios and modules are changed, so that retailers and customers can never be sure if they are purchasing a product for the first time or merely repurchasing it (brazenly, the Busting the Bocage rules claim that the purpose of the new scenario titles is to “avoid confusion”).  It would seem, at least, that Critical Hit must believe that the only way it can survive as a full-time game company is by constantly repainting and reprinting its old catalog.

So we have this 4th Edition Busting the Bocage as a result.  The major change is in the map, which now comes in the form of two overlapping maps printed on light cardstock instead of paper.  The artwork is slightly revised.  Critical Hit did not pay to have the maps folded in half.  They come as two large, flat maps, which makes the product larger and more awkward to store than other official or unofficial ASL products–unless the user folds the maps himself.  Players should be warned that, unfolded, the maps are susceptible to being bent.  Moreover, the use of nonfolded maps also apparently necessitated Critical Hit abandoning a ziplock bag for storage, simply encasing the contents in shrinkwrap instead.  This means that, after opening the product, ASLers will not be able to store the product in its original packaging unless they carefully cut a slit open in the shrinkwrap to preserve it.  Critical Hit clearly needed to fold the maps.

The other change is the addition of a countersheet, which simply duplicates the countersheet provided in the 2012 edition of Pointe du Hoc.  Consequently, many of the counters, such as Scaling Ladders and Ropes and Landing Craft, are useless for Busting the Bocage, which has no water, beaches or cliffs.

For owners of a previous edition, there’s no particular reason to get this new edition.

5th Edition (Petty’s War) Comments: It was inevitable that Critical Hit would rename and rerelease Pointe du Hoc/Busting the Bocage, a module that has gone through so many iterations it even fooled Desperation Morale into dividing it into two entries.  In 2017, Critical Hit announced the release of Petty’s War for $79.95, a product that turned out to be the latest iteration of PdH/BtB. Desperation Morale has not purchased a copy of this edition because at some point you just have to say, “that’s fucking enough.”  Critical Hit claims that this edition includes 8 scenarios, an “expanded” map, rules, play aids, and 540 die-cut counters. Note that Critical Hit component claims are frequently erroneous, particularly for counters.  This edition probably has a map that is formed from four or more 12″ x 18″ unmounted (heavy paper/light cardstock) glossy map panels that must be assembled to form the playing area. 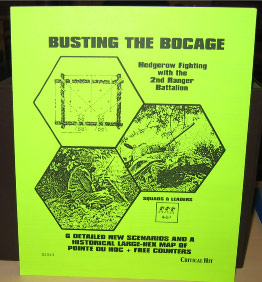