2nd Edition Upgrade Kit: as above, except no historical map.

The 2nd Ranger Battalion’s assault on the cliffs of Pointe Du Hoc on D-Day is the theme of this historical module, designed by Mark Porterfield and developed by Brian Martuzas.  As such, it is one of the very few ASL historical modules that depict amphibious operations.  Special rules add considerable flavor; they include massive craters caused by the D-day bombardment, special Atlantic Wall fortifications such as blockhouses and gun bunkers, scaling ladders and ropes, and more.  These rules create a unique playing experience, but at the expense of considerable complexity.

The countersheet included with the module includes a new German squad type (5-4-7s) and the “controversial” U.S. Army Ranger squads.  The Ranger squads are 7-6-7 squads which can deploy without a leader (more or less as Finns can).  However, a deployed ranger squad is replaced by two 3-4-7 half squads plus a 1-6-8 BAR gunner.  It is the SMC with the Browning Automatic Rifle which is controversial, as it proved open to all sorts of ahistorical abuses.  As a result, the BAR gunner rules were not widely accepted by ASLers.

Action takes place on a fairly attractive map depicting the beaches and bocage of Pointe du Hoc.  It does a good job of representing the many enclosed fields.  The campaign game that uses this map is 7 campaign dates long, which makes it fairly manageable, but includes the amphibious landing.  The five scenarios are also fairly complex (including one scenario depicting the landing).  Four of the five scenarios involve NOBA, so players should be familiar with those rules.  Probably for this reason they have not seen very much play.  They range in size from very large to quite small.

Pointe Du Hoc will not appeal to everyone’s tastes, but for D-Day and amphibious enthusiasts, it may prove rewarding.  Critical Hit released a Pointe du Hoc Gamers Guide at around the same time.

2nd  Edition Comments:  In late 2008, Critical Hit reprinted a limited 2nd edition of Pointe du Hoc in anticipation of its 2009 release First Wave at Omaha, claiming that the two games use the same rules, art and counters.  This is not quite true.  For example, the map in Pointe du Hoc is the same as in the original (the 2nd edition was allegedly based on 150 extra PdH original maps which were still lying around), which was an early style map printed on glossy paper, and it is quite unlikely it will have the same appearance as First Wave at Omaha.  The second edition contains a sheet of 4 “Destroyer Cards” that must be cut out to be used; these resemble the AFV cards Avalon Hill tried as an experiment in its DASL modules, but probably are more useful given the complexities of representing a destroyer in ASL terms.  It also contains one more scenario than the original did, PdH6 (Lang’s Group), a smallish, fast-playing scenario.  Other changes include dropping the controversial BAR gunner counters from the original (replacing them, more or less, with heroes) and changing the Ranger squads from 7-6-7 squads to 6-6-8 squads.  The 2nd Edition contains one large countersheet that replaces the two small countersheets of the original and contains better artwork.

3rd Edition Comments:  In late 2012, Critical Hit released a third edition of PdH, which is essentially the same as the 2nd Edition except in two respects.  First, a new historical map replaces the older map found in previous editions.  This uses artwork more compatible with the Omaha modules.  However, the map cannot escape without amusing errata:  the map’s compass rose has East and West transposed, and Critical Hit had to include a small overlay to fix it.  The second way in which the 3rd Edition is different is the new version of the countersheets.  For a third time in one module, Critical Hit has changed the way it portrays Ranger squads.  The 1st Edition used 7-6-7 squads; the 2nd Edition used 6-6-8 squads; this 3rd Edition, for no particular reason, now uses 7-6-8 squads.  It also brings back the 5-4-7 German squads introduced in the 1st Edition but dropped from the 2nd Edition, as well as the BAR gunner SMC from the 1st Edition.  These revised counters were simply inserted into previous versions of the scenarios.  So, for example, the 1st Edition version of PDH1 (Praise the Lord) featured a German OB that included 10 5-4-7 squads and 5 4-3-6 squads, for a total of 70 squad firepower points.  The 2nd Edition version changed it to 10 4-4-7 squads and 5 4-3-6 squads, for a new total of 60 firepower points.  The 3rd Edition version went back to the original.  The number of squads never changed.  Meanwhile, the Americans started off with 15 7-6-7 squads (105 firepower points), then went to 15 6-6-8 squads (90 firepower points), then went to 15 7-6-8 squads (105 firepower points again).

Note:  Starting in 2001, Critical Hit also began publishing versions of this module under the title “Busting the Bocage” (and later, under other names still).  Readers should go to the Busting the Bocage entry for all other information related to this product. 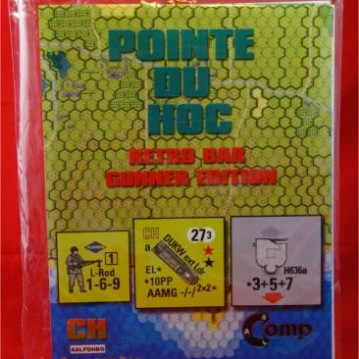