CH Annual Issue 4 is the fourth iteration of its re-imagined house mag for ASL players.  Magazines pose a particular problem for Critical Hit as a publisher.  Ray Tapio himself is neither a good writer nor editor, nor has he been able to find someone else to edit his magazine products for some years.  For that matter, people who can write about ASL in a cogent and half-decent fashion are themselves hard to find, and few of the ones who can are willing to write for Critical Hit. The result is that magazine content for a Critical Hit magazine is hard to find or generate and is rarely going to be of a good quality.  The handful of issues of CH Annual published so far, this one among them, have a real grab bag of content, including often very old submissions pulled out of the filing cabinet, dusted off, and slapped into the magazine.  Ray Tapio has instead tried to load the issues with maps, counters, and so forth, rendering the actual magazine content unimportant. There is really no reason for Critical Hit to publish an ASL-related magazine, and it doesn’t play to any of the company’s strengths, so it is not clear why they continue.

The theme for this issue, presumably due to MMP’s release of Forgotten War, is the Korean War, though the theme is not reflected so much in actual magazine content as opposed to the various other components found in the product, which will be discussed below.

Let’s discuss the magazine itself first, starting with the letters to the editor, which are no such thing, but simply random e-mails Ray Tapio received and decided to print parts of. The actual names of the writers do not even appear–instead, only first names or initials are used, as if the the content of the missives were too steamy to use real names, like Letters to Penthouse:  “Dear Critical Hit, I can hardly believe myself that this happened, but there I was, playing Hill 621, when these two co-eds walk in…”  But this is a family website.

The first article, by Brian Martuzas, is a narrative with photos of a trip to Stonne, subject of an oft-reprinted Critical Hit module.  It is followed by an “SSR Roundup,” a nearly indecipherable collection of more or less random SSRs and optional rules assembled together with inexplicable commentary by Ray Tapio.  There might well have been some useful idea behind this, but it is pretty much entirely lost in the execution.

Up next are the Korean War rules required for the Korean War scenarios and boards included in the magazine.  These are rudimentary rules, in no way derived from nor resembling the Forgotten War rules.  The Chinese do not even appear here. There are a few terrain rules (such as for “Blasted Tree Stumps” and “Razor-back Ridges,” as well as bunkers. Rules for razorback ridges are definitely needed in ASL, but the ones here are not that great.  Other rules provide for “Flash Fire ‘U’ Barrages,” and “Handi-talkies,” a rule Critical Hit has thrown into many other products. There are also a handful of vehicle notes.  There are only really 3 pages of rules total, plus a “Korean War National Capabilities Chart” that includes only the US and NKPA.  This has all the hallmarks of something quickly hashed together, which of course it is.

The next article is a piece on target acquisition by the deceased Hal Hock, who never played ASL in his life and certainly does not write about it here. However, Ray Tapio throws in an “optional rule” ostensibly derived from the principles in the article.

Mark Porterfield contributes “Bring on the Battlewagons!” an article on Heavy NOBA in World War I and II and 8 pages of detailed rules for implementing a Heavy NOBA system in ASL.  Desperation Morale does not pretend to have the knowledge really needed to evaluate this.

There are also two (non-Korean) scenarios in the pages of the magazine that must be scanned, scissored or photocopied. Both are World War II scenarios (Cassino and Normandy) that are presented using the Korean boards that come with Annual 4.  No scenario designers are credited. It’s not clear if these scenarios are recycled scenarios tweaked to use the Korean boards included in the Annual or are original scenarios.

Finally, a last article is “Scenario Special Rules,” apparently a dusted-off ancient submission (uncredited by Critical Hit, so far as we can tell) with a set of rules and suggestions on making solitaire play of regular ASL (not SASL) more realistic.

Annual 4 comes with three and a half countersheets.  The first countersheet is a sheet of 1/2″ counters featuring North Korean Infantry/SW. They are Soviet-colored and pretty much duplicate Soviet counters except for a 4-3-7 squad type and a 4-4-8 squad type (instead of 4-4-7 and 4-5-8 types), as well as some captured Japanese mortars and American Bazookas.   The second countersheet, also with 1/2″ counters, provides American Infantry and SW, all standard except for BAZ 50s and “handi-talkies.” The Americans do not appear in standard American colors but rather in a very dark olive drab, a color that works well on wargame counters in combination with white color values rather than the black color values that appear here.  Obviously, the counters here are not color-compatible with any official US counters, either.

Finally, there is a 1/2″ half-countersheet thrown in as a “bonus” sheet.  Other than a few markers indicating lack of special ammo, this sheet contains nothing but leader counters. Soviet leaders, Japanese leaders, Italian leaders, Romanian and Hungarian leaders, German leaders, British leaders, Allied Minor leaders. Here’s the kicker:  all 122 of these leaders are named “Dunham.”  Apparently some guy named Dunham ordered a set of vanity counters from Critical Hit and the company is getting rid of the remainder here.  All we can say is that if your last name is Dunham, brother, did you get fucking lucky.

Annual 4 also comes with 5 “Korean” geoboards, K1-K5.  Each is an 11″ x 16″ “gary-style” geoboard.  The ends of the geoboards are not trimmed properly, so the boards can’t be set up directly adjacent to each other; rather, one must slightly overlay its neighbor, which will require taping down, the use of plexiglass, or some other mechanism.  Critical Hit boards like this are of limited use, as other third party publishers won’t design scenarios for them and even Critical Hit forgets about the boards quickly and doesn’t really support them with future products. Basically, the boards here can be used for the scenarios here, for the Pusan Perimeter “expansion” product for this module, and for DYO.  In all likelihood, the boards will not used beyond that (unless they are somewhere reprinted).

Having said that, the boards are attractive enough, with clear terrain.  Critical Hit has a problem with rendering buildings in its boards of this era, with many appearing blurry or pixelated, but that is mostly avoided here (although board K5 contains some examples), primarily because there aren’t many buildings and most of the ones there are tend to be small.  The nicest thing about the boards is the presence of rice paddy terrain.  The only other novel terrain types are the tree stump hexes and razorback ridge hexes, which only appear on board K4.  Both are a little hard to see against the dark backdrop of Level 4 hill hexes and probably should have used some other type of coloring.

K1 is a countryside board, with large patches of woods and a huge area of brush, in addition to several large depressions filled with rice paddies. K2 is more cluttered; it is essentially a wilderness board (no buildings), pitted with orchards, woods, brush, swamp, grain, ponds, and a single small 1-level hill in the middle of the board. K3 features shellhole-ravaged terrain dominated by two large multi-peaked hills separated by a narrow valley. K4 is also full of shellholes; it is dominated by a large, roundish 4-level hill, although there are three small hills also scattered about. Finally, K5 is a perfunctory and plain village hex with little to say for it. Interestingly, none of the boards have a single stream on them.

To go with the rules, counters and geoboards provided, Annual 4 , the product includes 10 scenarios on cardstock, all dealing with the Korean War. At least some of the scenarios seem to be previously published scenarios, simply re-released here.  It is worth keeping in mind that all such reprinted scenarios would need to have been replaytested, as they were changed to fit onto the new Korean boards rather than their original geoboards, but there is no evidence here that any playtesting actually took place. All of the scenarios here involve only North Koreans and Americans.

Finally, Annual 4 reprints the “offboard overlays” designed originally by Steve Pleva that appeared in a long ago issue of Critical Hit magazine. These overlays consist simply of a couple of rows of open offboard terrain.  They are designed to line up next to geoboards so that people can set up entering reinforcements on them; they are useful for people who have difficulty imagining the offboard hexgrid.

Around the same time as this module’s release, Critical Hit also released–for separate purchase–a “HotHex” version of the geoboards here, which seems to be a larger-hex version.  Critical Hit claims that “each map found in the module is provided as a 22″ × 34 set of 4 linking boards.” 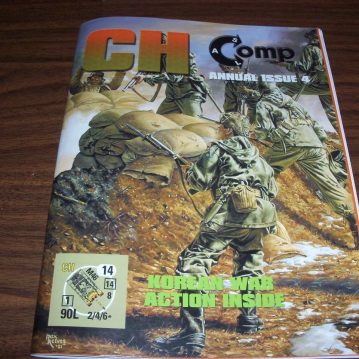