Pusan Perimeter adds 4 more 11″ x 16″ geoboards to the 5 that originally appeared in Annual 4, and 8 more scenarios.

Like the boards in Annual 4, the geoboards here are not properly trimmed along two edges, requiring them to overlay adjacent boards rather than simply be set next to them. However, the boards are otherwise generally attractive.  K6 is dominated by a large level-3 hill mostly covered in brush. Brush and woods dominate the surrounding terrain.  K7 is a village board, featuring a small crossroads hamlet consisting mostly of what would probably be decreed as huts. There are also grain fields and rice paddies, as well as lots of orchards and brush.  It’s a rather busy board. K8 features two hills perpendicular to each other, which is an interesting configuration. A few shellholes dot the terrain. Finally, K9 is a board of two halves. One half is dominated by rice paddies and grain.  The other half features a tiny hamlet, a brush-strewn depression and a considerable amount of orchards. All in all, CH’s Korean boards have more than their share of orchards.

The 8 scenarios have no designers listed, nor any playtesters, which is not a good sign. Despite the name of the product, only half of the scenarios take place in the Pusan Perimeter.  The North Koreans appear in every scenario, the US in most.  South Koreans and the Commonwealth Brigade each make a guest appearance.  While some of the scenarios are very small, there is one quite large scenario featuring the USMC. It depicts a North Korean assault with 27 squads and 5 AFVs against a USMC force of 14 squads, 2 RCL and 2 Pershings. It uses 6 of the Korean geoboards.

Around the same time as this product’s release, Critical Hit also released–for separate purchase–a “HotHex” version of the geoboards here, which seems to be a larger-hex version.  Critical Hit claims that “each map found in the module is provided as a 22″ × 34 set of 4 linking boards.”

Except for people who might want the boards for DYO purposes, there is no real reason to get this product. It’s not compatible with official Korean War rules, the rules that it does use are a partial hodgepodge, and it’s not clear the scenarios here were playtested. ASLers interested in the Korean War ought to look instead to the recent official and third party Korean War products centered around Forgotten War. 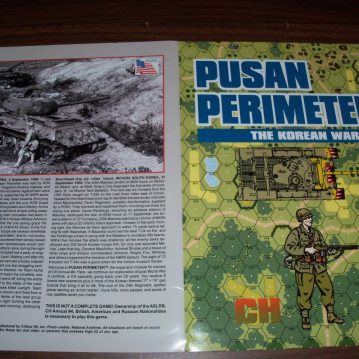