Alternative Titles/Edition History:
Note: In 2006, Multi-Man Publishing released Rising Sun, a module that combined Code of Bushido and Gung Ho into a single volume as a new edition.

Note: in 2013, MMP released a new module, Rising Sun, that combined the contents of Code of Bushido and Gung Ho.

Code of Bushido introduces the PTO, and in particular the Japanese armed forces, to ASL.  Other rules account for PTO terrain (bamboo, jungle, kunai, etc.; other PTO rules are included in Gung Ho).  Code of Bushido brought an entire new world to ASL; fighting in the jungles and swamps of the Southwest Pacific or Burma is very different from the steppes of Russia or the hedgerows of Normandy.  Moreover, the Japanese were combatants who fought, and died, in a very different way from other participants in World War II.  Code of Bushido’s treatment of the Japanese was a stroke of genius–the Japanese in ASL are perfectly integrated into the system, yet extremely different in nature.  As a result, they are one of the nationalities considered the most fun to play in ASL.  Code of Bushido was a tremendous success in terms of design, and has allowed the creation of some of the best scenarios in ASL.

Its popularity is less than some other modules, in part because so many ASLers are East Front fanatics and in part because many people perceive the PTO rules to be difficult.  In truth, though, the complex PTO rules are mostly those that come with Gung Ho and apply primarily to caves and amphibious landing.  The basic PTO rules, which are used for the vast majority of PTO scenarios, are easily learned.

Code of Bushido has been out of print for some time, which has driven its price up heavily on the secondary market.  It will likely be reprinted in the next year or two, presumably combined with Gung Ho into a single PTO package. 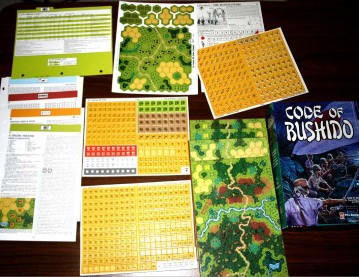