Contents:
48 page magazine that includes 15 scenarios as pages of the magazine.

Critical Hit Magazine Issue #2.  48 pages (including 15 scenarios).  The second issue of Critical Hit Magazine, billed as an “Eastern Front Special Issue,” is meatier than the first, increasing both the number of pages and scenarios by a third.  Worthy articles include a Scenario Replay (of CH13, Moyland Bloody Moyland) by top-rank ASL players Ray Tapio and Steve Pleva, an article with tips for beginners by Russ Gifford, and an article on Red Barricades tactics by Tim Robinson and Tom Ruta.  Some copies may have come with cave and landing craft play aids or an ASL Index (they are mentioned in the “Editor’s Corner”).

Among the scenarios are several good choices, including CH11 (Rite of Passage), CH15 (No Farther, a Rout Report reprint), CH16 (Out of Luck), CH18 (Raging Furnace), CH25 (Land of the Khan), and an all-time classic, CH14 (Ninety Minute War), designed by Steven Swann, a tense and quick playing tournament-sized scenario.

CH15 (No Farther) takes place in Stalingrad and uses the Red Barricades HASL map.  CH21 (A Ridge Too Far) features a Seaborne Evacuation. CH24 (Those Normandy Nights) is a DASL scenario.

On the down side, CH19 (Into the Valley) is clearly a generic made-up non-historical scenario.

It is an issue worth getting. 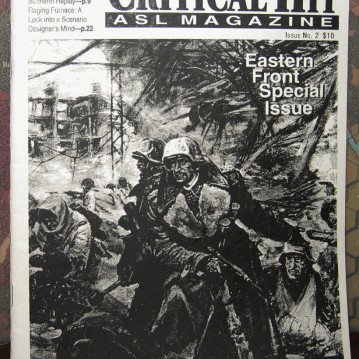