Contents:
60-page magazine, including 15 scenarios as pages of the magazine.

Critical Hit Magazine Issue #3.  60 pages (including 15 scenarios).  Critical Hit’s third issue was the meatiest yet, expanding in size once more.  Noteworthy articles include a Scenario Replay by Eddie Zeman and Francis Hardiman of a God Save The King scenario (Block by Bloody Block), two SASL missions (“Secrets” and “Destiny Riders”), a Platoon Leader campaign game (Arakian Rose, a 1945 Burma campaign with just 4 CG dates), and a ten year retrospective of the ASLOK tournament’s first decade of existence by Mark Nixon, which is an interesting insight into the early days of ASL.

The scenarios in Issue #3 are chock full of goodies, with several genuine classics, including CH26 (Close Order Dreil), CH28 (Children of the Kunai), and CH34 (The Lighthouse), designed by Michael Telson, the Paddington Bears, and Steven Swann, respectively.  Other worthy scenarios include CH30 (Kravchenko’s 6th Guards Tank Army), CH33 (At the Point), and CH40 (Nordic Twilight).  Many of the scenarios in Issue #3 are from the Australian “Paddington Bears” ASL club, which for several years had a relationship with Critical Hit that allowed their excellent scenarios to reach a wider audience.  This issue is one of the better Critical Hit issues. 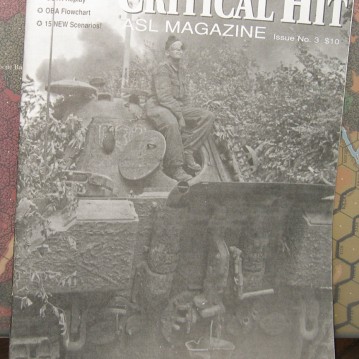