Critical Hit Magazine Volume 5 Issue 1.  52 pages (includes 6 scenarios).  The largest portion of this issue of the magazine is taken up by Version 2.12 of Critical Hit’s Platoon Leader campaign games rules.  Since it was shortly superceded by another version, that means this outdated version is so much wasted space in the magazine.

The issue also includes an updated version of the Platoon Leader German-Finnish campaign game PLFH (Frozen Hell) and an SASL Mission, DTW-1 (Recon in Force), that uses the Dzerhezinsky Tractor Works map.  Interesting articles include a guide to river assaults by Chris Maloney and an analysis of the Frozen Hell campaign game by Jim Torkelson.

The scenarios included with the issue are not particularly popular, making this another essentially disappointing issue.

2014 Note:  In 2014, Critical Hit reprinted this issue of the magazine in a nearly identical format as the original. 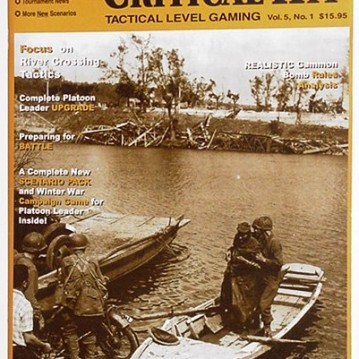