Deluxe Advanced Squad Leader (or DASL, as it is more commonly referred to), has long been the red-haired stepchild of ASL, perhaps even more so than SASL, insofar as SASL even had a 2nd edition and a variety of supplements for it.  But DASL spawned only two early products, Streets of Fire and Hedgerow Hell, then (due to lack of popularity) essentially fell by the wayside.  Official support consisted only of the occasional scenario released for it, while third party support consisted mostly of the same, except for a couple of third party DASL geoboards released by Bounding Fire Productions and Heat of Battle.

The problem with DASL is that it was designed to be a crossover product for miniatures enthusiasts, but by and large, miniatures players rejected it (there are occasional isolated exceptions).  DASL has little to offer traditional ASL players except bigger hexes–but the hexes are so very big that the maps are physically inconvenient at the same time they represent only a tiny cartographic area.

Despite this fact, there have always been some players who have championed DASL, and more players who like to take an occasional dip in the DASL pond.  Over the years, various publishers, official and unofficial, have bruited about the notion of a new DASL module or a DASL map pack or something similar.  However, none of those ever came to pass.  Until 2014, that is, when a group of DASL enthusiasts led by Dave Ramsey (of ASL Scenario Archive website fame) took up an unfinished DASL notion from Steve Swann and brought it to completion, arranging with Le Franc Tireur to do the physical production and publishing.  Deluxe Pack #1 (which by its very title threatens sequels) thus becomes the first DASL-dedicated product to be published since 1987, a rather remarkable feat.

Obviously, the main thing the Deluxe Pack has to offer is its new boards.  The pack comes with 7 of them (d1 through d7), which is a rather generous amount.  Each are printed in full color on light cardstock, just like modern official geoboards.  Whereas Streets of Fire featured dense downtown urban terrain and Hedgerow Hell featured bocage, Deluxe Pack #1 tends to feature a variety of more rural or wilderness themes.  This also allows DASL to visit the PTO in a way that just could not really be done before.

Overall, the mix of boards is an interesting one.  There is a clear emphasis on wilderness and/or PTO-compatible boards here.  Some can fit with Hedgerow Hell maps, but mating them with Streets of Fire maps would mostly be a bit jarring, as they contrast so much.

With Streets of Fire and Hedgerow Hell, the artwork was designed to ape standard ASL artwork insofar as it was possible.  That was not the intention here.  Rather, the producers went in the opposite direction and created very new and very different digitally-derived artwork with a heavy reliance on textures.  This makes them look very different indeed from official DASL maps.

The nature of the artwork may well end up having a polarizing effect, as it has a strong and distinctive style that nevertheless may not be to everyone’s tastes.  In some respects the artwork succeeds well and is attractive, but in other respects there are lesser or greater problems.

There is also a bit of mystery terrain, such as hex d2O2–is that a path (to nowhere?)?  A glitch?

Some people will like the terrain style, others will hate it.  For the most part it is functional and not too objectionable, although there are some clear areas for improvement if there are follow-on products.

One other aspect to the maps must be pointed out:  they do not mate up exactly with official DASL boards.  This is due not to a mistake (such as the erroneous hexgrids that have plagued recent Critical Hit geoboards) but rather due to an odd feature of the original Streets of Fire and Hedgerow Hell boards.  Those boards were all mounted boards, with a paper map glued onto what were essentially thick sheets of cardboard.  The way these mounted maps were put together, so that they could be folded, required an indentation down the middle of each board, and required the glued maps to dip down into the indented area (to accommodate folding).  As a result, on official DASL maps, the center row of hexes is actually slightly narrower than all other hexrows, which means that when a Deluxe Pack map is lined up against an official map, it will mate perfectly on one half of the map but be slightly off on the other half of the map (the half beyond the center row).  Those people who may have unmounted official DASL maps purchased from Avalon Hill or MMP probably would not have this issue–it is likely to exist only with mounted maps.  Thus this is an odd instance where the third party boards are more “correct” than the official boards.

The good thing is that DASL maps contain so few hexrows that, though the problem is visually obvious, there is not enough room for it to cumulatively grow and become a true functional or practical problem.  The difference remains small enough that there probably won’t be any significant practical, as opposed to aesthetic, effects.

Deluxe Pack #1 comes with 12 scenarios, designed by a diverse set of hands (some of them relatively new to scenario design), generally an Anglo-American mix with a hint of the continent thrown in.  The scenarios are all printed in color on glossy light cardstock using Le Franc Tireur’s latest color counter artwork, which for vehicles is nice but which for SMCs/MMCs sometimes seem to turn the figures on the counters from icons to more cartoony figures.  Overall, however, the physical presentation is impressive.

The scenarios are a mix of small, medium, and large-sized actions, slightly tending towards the small.  There are no scenarios that could be considered very large, which may disappoint those DASLers whose stated love of the subsystem is largely due to opportunities for meatier play.

Several of the scenarios have interesting SSRs or depict interesting situations.  In FT207 (The Last Pillbox), the defending Japanese are allowed to choose two special abilities from an array of six possibilities, including a -1 Ambush drm, Fanatic status in buildings, extra Tank Hunter Heroes, and other options.  Scenario FT197 (Spoiled Afternoon) is an ultra-tiny “battle of half-squads,” featuring 8 Polish half-squads/crews and 2 AFVs arrayed against 10 German half-squads/crews and a few vehicles.  This scenario is a convoy ambush situation, which don’t tend to play well in ASL.

One scenario, FT202 (Burmese Bandits), is actually a three-player scenario (of very vague historical provenance–this is one of the only published ASL scenarios that only give a month and year for the action, not an actual date) set in Burma in 1945, pitting the Burmese National Army (and a few British reinforcements) against its former allies, the Japanese and Indian National Army.  This is the one Deluxe Pack scenario that uses 4 boards (although it should play fairly quickly).  The scenario contains major errata, as the Japanese OB should have 6 3-3-6 squads, not 3 such squads.

It should be noted that this product is not cheap; in the United States, it is likely to set an ASLer back about $85 to $95, not including shipping.  This dear price, combined with the fact that it is DASL-oriented, may well mean that a number of ASLers might choose to take a pass on it.  However, for DASL lovers, this is a worthy addition. 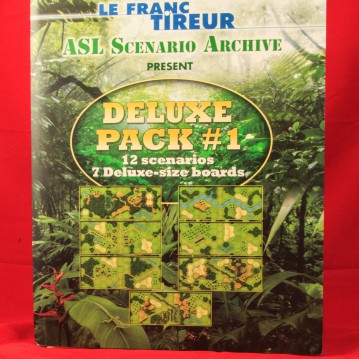