Contents:
Desperation Morale has not examined this product and cannot verify any claimed contents. However, it appears that this product contains 6 12" x 18" glossy heavy paper/light cardstock map panels, 6 scenarios, and three sheets of die-cut counters.

Edson’s Ridge (hereinafter ER) is a bare-bones historical module depicting fighting on Guadalcanal in September 1942.  In essence, it repeats the historical map content (sans campaign game) of the MMP historical module Operation Watchtower, which has considerably more play value.  At $79.95, ER is quite expensive for what you get with it.

ER comes with a historical map featuring the eponymous ridge, a map that is serviceable and attractive, though perhaps not quite as interesting as the Watchtower map.  It also comes with six scenarios, one of which is a “monster”-sized scenario utilizing the whole map area.  It also features several countersheets of Japanese and USMC troops, with the USMC rendered in an olive coloration.

However, ER appears to come with no rules pages, which is odd.  There are only two “global rules” that apply to all scenarios.  No designer is listed and, not surprisingly for Critical Hit, no playtesters are mentioned, either. It is doubtful that the scenarios in the module were playtested.

The half-dozen scenarios that are included are divided equally between small, medium-sized and large-scale actions.  Five of the six scenarios use ultra-simplified “Night rules” that consist entirely of this passage:  “No LOS exists beyond 3 hexes unless a unit is marked as Fired, and fire at so-marked units is per the rules for Gunflashes (E1.8). Starshells and IR may still Illuminate normally.”  Three of the scenarios feature (American) OBA.

Three countersheets are included.  One features USMC support weapons and vehicular crews.  Unfortunately, the counters are an olive-brown color incompatible with regular ASL counters for the Americans. And since the product includes no MMC for the USMC, this is a big problem.

The second countersheet features Japanese MMC/SMCX and SW. Inexplicably, this countersheet provides 4-3-8, 4-3-7, and 3-3-7 squads for the Japanese, with no explanation.  It should be noted that none of the scenarios use any such squads; they all use actual Japanese squads (4-4-8 and 4-4-7).  This seems to be some strange mistake. So it appears this countersheet is worthless as well.

Thus for three different reasons, it seems that all three of the countersheets in this product are essentially unusable. That’s a hell of a hat trick.

ASLers are advised to stay away from this product, which gets a Desperation Morale CONSUMER ALERT. 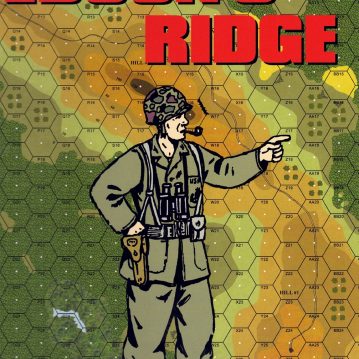