Operation Watchtower was much anticipated by PTO enthusiasts who wanted more jungle fighting (as opposed to the beaches and palm trees of Blood Reef: Tarawa).  OWT certainly provides that, in spades, especially the relatively small but tense campaign game.

Overall, however, OWT was one of MMP’s less successful releases.  The original map had significant printing problems, so much so that MMP had to have it reprinted.  Even fixed, the map (confusingly titled Edson’s Ridge rather than Operation Watchtower) is problematical because it is so large–it should have been cut into two maps.  It is the largest single official ASL map, though needlessly so, and may not fit on every gaming table.

Some ASLers were not very happy about the scenarios, either; many of them are night scenarios, and quite a few of them use a large number of overlays (one uses a very large number).  Moreover, some of the scenarios have been revealed over time to be quite unbalanced–in particular, HS4 (High Water Mark), HS7 (We Know Where They Are), HS10 (Government Property), HS 12 (Chesty’s Turn), and HS 16 (Sims’ Ridge).

There are 16 scenarios, most small or medium in size (there is no monster scenario). Four scenarios use Night rules.  Six scenarios have OBA and two use Air Fules.  Five of the geoboard scenarios require the player to assemble beach overlays; it would have been far more convenient for MMP to have included a single custom overlay to use in such instances.  HS9 (Ambitious Plans) is a Seaborne Evacuation.  Only four scenarios use the historical map and none use all of it.

The game comes with one campaign game, ER CG (Edson’s Ridge).  It has five campaign dates, three of which are night dates.  Unlike a number of the scenarios, the campaign game is pretty balanced and may well be the best bet for enjoyment (as long as players are okay with Night rules).

For PTO or USMC enthusiasts, Operation Watchtower is worth getting.  For others, this can be lower on your ASL shopping list.

2010 Update:  In part due to the publicity generated from this entry, MMP eventually did decide to use the Hell’s Corner map, releasing it in Operations Special Issue #3.

Another curiosity is not something which wasn’t printed, but something that was printed.  Before coming to an agreement with MMP for “official” publication of Operation Watchtower, El-Farra actually printed a small number of copies of a Watchtower countersheet.  Because MMP ended up publishing the module, these counters were never used but were apparently given away (see images below).  This countersheet is one of the true ASL rarities. 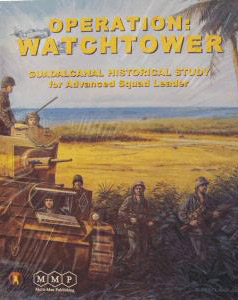