FireFights! #2 (FF2) is the sequel to FireFights! #1, which pioneered a new type of scenario pack featuring small, ostensibly historical maps along with very small scenarios that have simultaneous setup and random reinforcements.  It adds six more scenarios and six new maps to the FireFights! collection.  As before, the scenarios are designed by Steven Swann, Burnie Hegdahl, and Bruce Rinehart, with two scenarios added by guest designer Chas Argent.

The maps in the second pack differ from those in the first in two ways.  First, instead of two backprinted maps to one sheet of cardstock, each map now has its own sheet of paper.  Second, the maps themselves are now all usable as fully compatible overlays designed to mate with specific boards.   Hopefully, this will allow both Heat of Battle and other scenario designers to utilize these attractive maps more in the future, so that they will not be associated with only a single scenario (2014 note:  so far this has not happened).

The maps feature terrain including a partially destroyed castle rising above the surrounding landscape, a dominating desert peak, a built-up urban scene (mate-able with board 1, which can give that old board a new look), a complicated desert hill formation, a hillside building complex, and a rather mundane farm crossroads.   The castle map and the two desert maps are definitely the most striking.  The maps mate with boards 1, 14, 19, 33, and 26-31 (for the two desert maps); scenario designers take note.

Like its predecessor, FF2 contains the “crew-served SW” grudge rules designed by Steve Swann; these rules force players to use crews to man MMG, HMG, and MTRs and provide additional restrictions for use of FT/DC.  The rules are grudge rules because they seek to change the basic ASL rules system itself, rather than exist merely for the sake of enhancing a particular scenario for a particular reason.

Also like its predecessor, the scenarios of FF2 feature variable reinforcements and simultaneous setup (5 of the 6 do, anyway; the 6th has one side entering by airdrop).  In response to criticisms about FF1, Heat of Battle said they would try to make the swing between different reinforcement DR results less drastic, and it appears that they have done so.  Nevertheless, the variable reinforcements still make already dicey scenarios even more so.  The simultaneous setups are also problematic, penalizing defenders who may not be able to see approach paths (or boresight effectively) and giving a distinct advantage to people who have played the scenario before.  As with its predecessors, the scenarios of FF2 represent a variety of actions, including Hungary 1945, British Somaliland 1940, Normandy 1944, Eritrea 1941, Belgium 1940 and France 1940.  The scenarios range in size from very small to one scenario that might be considered medium-sized.

With the FireFights! series of packs, Heat of Battle  demonstrated that it was on the cutting edge of trying to find new ways for people to enjoy ASL.  The small, specialized maps are a good idea and one that hopefully other designers will try in the future.  However, in terms of practical realization, both of Heat of Battle’s Firefights! packs have been failures. 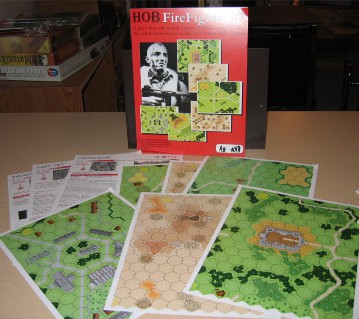