First Wave at Omaha (FWaO) is, in many ways, Critical Hit’s most ambitious ASL compatible product to date. It is certainly its largest (and most expensive), with three full-sized maps and over a thousand counters. FWaO depicts what its title suggests, the beginning of the D-Day landings at Omaha Beach. This is a subject that several people attempted in the past, but never succeeded in coming up with a finished product. One of a flood of Normandy-related products released in 2008-2009, FWaO is unique in that it actually deals with the landing itself and not the later fighting inland. FWaO does not depict the entire Omaha landing, but rather the western portion of the battle, involving the 116th Infantry Regiment of the 29th Infantry Division.  Omaha East, its sequel, depicts the other half of the landing.

Many rules represent the terrain at Omaha. There are rules for “Buildings with Roads” (in which roads are not along a hexside, as per Village Terrain), for on-map trenches and perimeter wire, for a water line that shifts as the tide rises, and for various beach obstacles and pillbox/casemate types. There are also rules for items such as Bangalore Torpedoes and TNT charges (including Bangalore and Tetryl Heroes). Other rules govern “On Board Naval Direct Fire” from nearby destroyers (!), as well as rules for the destroyers themselves. Another new feature are on board rockets, such as Nebelwerfers.

FWaO also (unfortunately) introduces two new squad types: 6-6-8 U.S. Army Ranger squads and 5-5-7 U.S. Army Engineer squads. It would have been nice if the existing American OB could have been used for these units. One interesting unit, however, is the General Cota leader counter, representing Brigadier General Norman “Dutch” Cota, immortalized in the movie “The Longest Day” by actor Robert Mitchum. Cota was the assistant division commander of the 29th Infantry Division, one of the highest ranking American officers to land in the initial attack, and was essential in salvaging the near-debacle at Omaha. He is represented in FWaO as a heroic 10-3 leader who acts as a kindly Commissar (i.e., failure to rally does not result in replacement). Moreover, his presence increases the morale level of all friendly Infantry units in the same AND adjacent hexes by +2.

What is most noteworthy about the rules is their relative brevity. The rulebook itself is only 12 pages long, but this includes one page of charts and two pages of climbing rules that are not actually used in the module, but rather are used in the related Pointe du Hoc 2nd Edition module.

The maps themselves are detailed and well-done, depicting not just the beaches themselves, but inland up to a kilometer or so, including a couple of villages and the beginnings of the dread hedgerows. The palette used is rather dark, so good lighting is needed to be able to distinguish some of the features on the map. Two terrain levels in particular use an almost identical color. The beach is well done.

The countersheets that come with the module include not only the new squad types and other new units required to play, but a full array of German and American squads, leaders, and SW. These are superfluous, but it is probably just as well, as using them (as opposed to the normal ASL unit countermix) would eliminate the potential problem of distinguishing between MMP counters and Critical Hit counters in a stack. The graphics on the counters are fine, but the depiction of information on them is severely flawed, especially for guns and vehicles. To avoid copyright issues, Critical Hit adopted a “variant” method of presenting information on counters which is not only different from the standard and accepted way of presenting information, but is also counter-intuitive. Other third party producers have come up with ways to produce much better looking ASL compatible counters that do not duplicate the “look and feel” of official counters; it is long overdue for Critical Hit to abandon their awful variant counter layouts and come up with a similar solution.

Although no campaign game for the Omaha landings is provided, much the same effect is created by a massive 39-turn invasion scenario, FWaO-16 (Black Day for the 116), which depicts the entire assault landing of the 116th Regimental Combat Team. Most of the play aids are designed for use with this scenario. It would be well suited for team play.

Somewhat strangely, the other 15 scenarios are heavily weighted towards the small in size. Only 4 are large, and 3 medium, while 8 are small in size. A couple are simply too small in size to be worth playing. FWaO-5 (Texas Tea), for example, features 2 American half-squads, 1 crew, Cota, three other leaders, and two modules of NOBA. The Germans have 3 squads, a crew, and two leaders. It is just not worth the effort to play such a tiny scenario. One would think that if any topic would attract those players interested in meaty scenarios, it would be the Omaha landings, but there is a shortage of such scenarios in the module. This is a bit disappointing.

Three of the 16 scenarios include OBA/NOBA, while five have seaborne assaults. This latter figure means that there is plenty to do in this module even for those players who don’t wish to have to deal with landing craft and the other complexities of amphibious landings.

With the exception of the scenario size mix, which seems too unbalanced in favor of small scenarios, this is a pretty impressive looking product. It is easy to imagine an Omaha module jammed to the rafters with special rules and complexity, but this is not it. This module is actually playable without a tremendous amount of rules-cramming. It also offers quite a bit of variety in its different scenario selections, from seaborne assaults to inland fighting. And the massive landing scenario should make all Amphibious ASLers salivate. This is one of Critical Hit’s more impressive releases of the past couple of years.

2nd Edition (i.e., Omaha West) Commentary: Only 3 years after its initial publication, Critical Hit released a renamed new edition of its Omaha module as part of a general effort in 2011-2012 to recycle, rename, and re-release as much of its entire catalog as possible. This means that First Wave at Omaha got a new edition before the second half of the planned two-part module (i.e., Omaha East) even got a first edition. The rationale behind all of the reprintings was that Critical Hit had decided upon a new, more user friendly style of counter artwork. This was definitely needed, at least for 5/8″ counters, as its previous style was nearly unusable. Because Omaha came with so many counters, and because these included some counters not provided in the “official” countermix, ASLers would probably appreciate the new counters here–though they are not worth the cost of re-purchasing this module all over again. However, it should be noted that most of the counters provided merely duplicate existing counters already in the ASL countermix and ASLers would not need them. The new counter artwork is the only significant difference between the 1st edition and the 2nd edition.

This third edition of Omaha West is substantially the same as the 2nd Edition in many respects.  The main difference is that instead of large historical paper maps, Critical Hit now uses a huge number (27) of 12″ x 18″ heavy paper/light cardstock glossy map panels to recreate the battlefield.  The advantage is that colors look fresh and bright on these map panels, as opposed to the traditionally drab look that has been attached to most past Critical Hit maps.  The minor disadvantage is that the glossy coating causes reflective glare.

This pales in comparison to the major disadvantage, which is that it is a royal pain in the Landing Craft: Ass to use these maps.  These map panels use extra-large hexes, which is why the module, already large to begin with, now requires such an ungodly number of map panels.  And each of these map panels, which slightly overlap with each other, must be properly positioned and maintained, either with some sort of adhesive or by putting them under the world’s largest sheet of plexiglass.  Practical experience suggests that it is not too cumbersome for maps of up to 4 panels in size, but anything beyond that becomes irritating.  Well, 27 map panels is way beyond 4 panels (to say nothing of combining Omaha West with the 28 map panels of Omaha East).

In practice, because so many of the scenarios are small in size, not all of these map panels will have to be used, so the problem is not quite insurmountable.  But to play the bigger, meaty scenarios means dealing a lot with a lot of panels.  The counter density for the majority of these scenarios is not all that high, so there is no real practical need for extra-large hexes; these maps are people who like big-ass hexes for their own sake.

The artwork appears to have been reworked in part, generally for the better.

Omaha West Monster is currently being sold by Critical Hit for $129.95.  Add the counters and the price jumps to $200–and that still doesn’t include Omaha East.  This is an extremely expensive edition.  As of this writing, the “Omaha West Final Countdown Edition” is still available for only $99.95–and it comes with counters.

Unless you are just a huge fanatic about super-sized hexes, there may not be enough reason to purchase this edition of the game.  It is extremely expensive and quite unwieldy.  The nicer color palette and map graphics are probably not enough compensation. 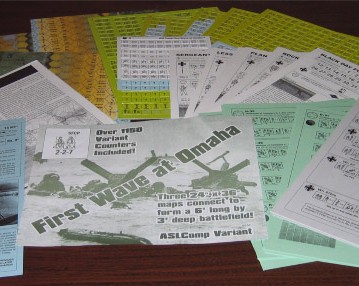