“Proudly produced in a whole bunch of countries” is the tag line that appears on Friendly Fire Pack 9 and it’s a true enough assertion.  With designers from Germany, the Netherlands, Switzerland, Australia and Sweden, plus playtesters from those countries and Denmark and the United States, Friendly Fire Pack 9 comes to the ASL community courtesy of a coterie of nationalities, an international collection of people with at least one thing in common:  a desire to create interesting and high-quality ASL scenarios.

Scenario FrF71 (Pulling Out) uses geoboard FrFA, as does FrF75 (Goodbye Brother), though neither scenario explains that the board can be found only in Friendly Fire Pack 6.

FF9 is full of interesting scenarios.  One of the more interesting–and challenging–scenarios is FrF76 (Pain in the Neck), which takes place in the final days of World War II in Europe (a la Rally Point 4).  In Pain in the Neck, a small force of SS squads (5-4-8s and 4-4-7s) and a handful of vehicles (including two captured Shermans!), need to exit across a map composed of the woods, hills, and stone buildings of boards 50 and 41.  A small Soviet force of 3 squads and 2 tanks come on board opposite them to oppose their escape, while a larger, follow-on force of 8 squads and 4 more tanks comes on board behind the SS to chase them.  To win, the Germans must exit 6 squad-equivalents (with inherent vehicle crews counting).  The scenario is a very tricky one, especially for the German player, as he must constantly keep his forces moving, while protecting his infantry dearly (as most will need to survive).  He has to use his vehicles both to help clear the way as well as to hold up the chasing Soviet forces.  The Soviet player, in turn, has to use his tiny blocking force as efficiently as possible, because a mistake could allow the German forces to squirt right past him and off the board.  Generally speaking, this is a tough job for the Germans (and early ROAR results certainly reflect this), although some expert-level players contend that with two quality players playing, it is the Soviets who have a bit of a disadvantage.  Make of that what you will, but it is certainly a gripping scenario.

FrF71 (Pulling Out) is a bad method of birth control but a good notion for a scenario.  This scenario also features captured vehicles.  It depicts a German artillery position surrounded by a Soviet force (8 squads and 5 T-34s, though they get a few reinforcements later), with a German relief force trying to come to the rescue of their comrades.  This German unit contained some captured T-34s, one of which appears in the German OB.  Additionally, two of the Soviet T-34s will turn out (randomly, during the course of play) to be abandoned, with their crews in the same hex.  The SSR allows the Germans to use T-34s without captured-use penalties, throwing out the bait for an attempt to capture one or both of the abandoned T-34s, should circumstances allow.

FrF75 (Goodbye Brother) features a German “amphibious” assault (using assault boats) against a small but prepared Finnish position.  The victory conditions for the Germans are very mild indeed, suggesting that the Finns will cause a lot of damage to the Germans.

FrF72 (The Mubo Decision) is a PTO action, which one doesn’t see all that much of in the Friendly Fire packs.  Set on New Guinea in the Wau area (where an air-supplied Australian force was annoying the Japanese far beyond Allied “front lines”), the scenario features a situation in which both Australians and Japanese have small forces in different areas that must move and fight (though the situation is essentially an Australian attack).  It’s a bloody scenario, but fun.

FrF70 (An Estonian Interlude) is unusual in that it depicts an “Estonian vs. Estonian” action.  In the summer of 1941, as Nazi troops invaded the Soviet Union, Baltic partisan groups formed to revolt against the Soviets.  This scenario depicts one such action involving Estonian nationalist partisans under a former army officer, Friedrich Kurg, attacking a Soviet force (consisting primarily of Estonian communists).  The historical aftermath does not mention the important role played by these 1941 Baltic partisans in the Holocaust.  Even in Estonia, where there were few Jews, Friedrich Kurg ordered the arrest of Estonian Jews and their internment in concentration camps (where they were soon killed).  Kurg went on to serve in collaborationist police and military units, eventually fighting for the Germans as part of the Waffen SS.  Today, he is sadly considered an Estonian hero.

Friendly Fire Pack 9 happily continues its tradition of interesting, well-playtested scenarios–this pack is well worth getting. 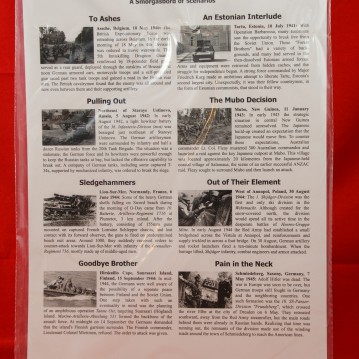