Released with little fanfare at ASLOK 2009 was the fourth in Schwerpunkt’s Rally Point series of themed scenario packs, Ruins of the Reich (RP4).  The pack is so-named because its uniting theme is that all the scenarios in the pack are set in the very last days of World War II in Europe–they are all set in May 1945.  All of the scenarios in the pack were designed by guest journeyman designer Mark Pitcavage, who coincidentally is the maintainer of this Web site and the author of this descriptive commentary, so caveat lector.

The last days of the war is an interesting subject for a scenario pack, because events were so chaotic in those final hours that a lot of unusual situations developed.  Former friends were sometimes now foes, while all sorts of old or captured weapons were brought out of the cupboards by the Germans in their desperate attempt to slow the Allied onslaught.  Desperation is indeed a subtext for the scenarios in this pack, as even the Axis attacks in the pack are often attempts to escape capture or decimation by the Soviets or other Allied forces.

The pack includes a mixture of East Front, West Front, and Mediterranean Front scenarios, though it should be noted that the Axis were so squeezed by May 1945 that the Allies were really not all that far apart from each other; the “East Front” was very far west, the “West Front” very far east, and the “Mediterranean Front” very far north.   Actions include two scenarios set in the vicinity of Trieste, Italy (one featuring Yugoslavs vs. Germans; the other featuring Yugoslavs vs. Germans, Italians, and Croatians); two scenarios set in the Austrian Alps (one featuring Americans vs. Germans; the other featuring Americans, French, and Germans against the Waffen SS); five scenarios set in Czechoslovakia or just across its borders (one featuring Soviets vs. Germans; two featuring Americans vs. Germans; and two taking place during the Prague Uprising, one of which is Czech partisans vs. Waffen SS and the other of which is Czech partisans, the Russian Army of Liberation, and the Soviets against the Waffen SS); and one set in the Halbe Pocket outside of Berlin (featuring Soviets vs. Germans).

The scenarios all have a fair number of SSRs; though none are particularly complicated, it is definitely a departure from the typically SSR-light regular Schwerpunkt scenarios.  However, no scenarios feature OBA, Night Rules, or Air Support.  One scenario, RPT31 (Able Was I Ere I Saw Elba), uses ASLSK board z.  In terms of size, about half of the scenarios are large, while the remaining ones are small or medium-sized.  Several of the scenarios feature “rainbow OBs,” in that the mix of nationalities and/or SW require players to use a number of different colored counters.  Some ASLers will find this irritating, though others may appreciate the realism.

Scenarios designed by this designer tend to have a fair number of “flavor” or “chrome” SSRs, and this pack is not an exception.  So, for example, in RPT36 (The Kings are Dead), there is an SSR that states that broken German units that start the Rally Phase in a building location without a friendly leader present have a small chance to be casualty-reduced.  This represents the German civilians who took the child-soldiers (kindersoldaten) of the last days of the Third Reich, provided them with civilian clothing, and helped them desert during the fighting.  The presence of these SSRs tend to give some of these scenarios a “feel” different from that of a stereotypical Schwerpunkt scenario.  Some ASLers like such flavor SSRs, because it gives them more of a sense of fighting in a non-generic action, while other ASLers would simply prefer that such SSRs not clutter up the scenario cards.  It is basically a matter of taste.

Though only time will tell as to how many of the scenarios are well-balanced, or will be considered by the ASL audience to be fun to play, certainly several of the scenarios are worth remarking on.  One interesting scenario is RPT31 (Able Was I Ere I Saw Elba), which actually contains rules for both two-player and three-player play (and both cooperative and competitive versions of the three-player option).  This makes it one of only three published scenarios (all third party) that are specifically designed with three-player rules.  It is a fairly meaty scenario that would be good for three ASL friends on a weekend day, or a long evening.

RPT36 (The Kings are Dead) is interesting for several reasons.  The Germans get some King Tigers to play with, while the Soviets must choose (pre-game) the order and entry locations of three reinforcement groups.  Also present in this scenario (and to a lesser degree in one other scenario in the pack) is the concept of Gas Points.  The Germans in the Halbe Pocket were down to their last few gallons of gas, and many AFVs simply ran out of fuel during the fighting.  This scenario allows the Germans to “gas up” their vehicles before the scenario, choosing how many Gas Points are put in each AFV.  When a vehicle runs out of Gas Points (expended during movement), it becomes immobilized.  Between the Gas Points and the Soviet reinforcement options, this scenario has a considerable degree of Fog of War.

Perhaps the most unusual scenario situation in the pack is that of RPT4 (Last Stand of the Besotten Jenny), which actually features a group of Americans (a tank crew and some African-American soldiers), re-armed French prisoners, and German former guards holed up in a castle trying to hold off angry Waffen SS troopers until the American “cavalry” can come and rescue them.  It is a pairing of combatants that has never been seen before in ASL.  The fighting is an interesting tactical situation, as the SS must choose how to divide their forces between the two “fronts.”

One other interesting tactical situation is worth mentioning; the situation in RPT35 (Sword of Damocles), which is a late-war Soviet-German combined arms city-fight that will appeal to “traditionalist” ASLers who like the down-and-dirty East Front actions.  In this scenario, the Soviets are immediately confronted with an opposed bridge crossing situation.  There are three bridges, at least one of which they must get across.  However, they have plenty of toys to help them get across, including (unusually for the Soviets) a good amount of Smoke.  Once across, they must exit 20VP off of one part of the map and 20 more VP across another part (which means the Germans can concentrate on defending one area, if they want to).  The Germans have a mixed force of defenders ranging from elite to conscript, along with some pesky panzerfaust-wielding tank hunting units, and some toys of their own, including an 88mm AT gun.

The scenarios in this pack are likely to appeal most to ASLers who are looking for scenario situations a bit different than standard ASL fare, but not something truly exotic or “way out there.”

2014 Update:  RP4 continued the trend that began in Rally Point 3 (and would extend through at least Rally Point 8) of Rally Point scenarios not being played very often.  Indeed, RP4 scenarios seem to have been played fewer than any other pack in the series, which may be attributable in part to the very esoteric nature of the theme.  However, the other packs beyond the first two don’t fare much better.  For whatever reason(s), Schwerpunkt the magazine seems far more popular than the Rally Point scenario packs. 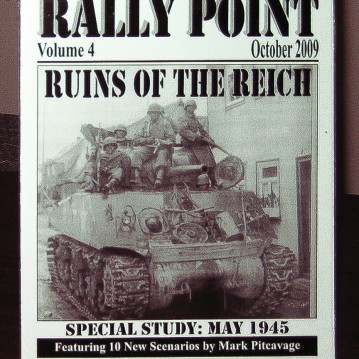