Home > Products > From the Cellar Pack 8

In late 2017, Le Franc Tireur released its latest From the Cellar offering, From the Cellar Pack 8.  However, it was quite a different product from previous iterations under the same name, as LFT had transformed From the Cellar from a pure scenario pack series into a periodical (despite still calling it “Pack 8”). Apparently this was done in emulation of Bounding Fire Productions, several of the products of which came with unnamed magazines of a sort. However, Le Franc Tireur already has a long-running ASL-themed magazine (indeed, the company is named after it!), so the decision to include this magazine material with a From the Cellar pack rather than in an issue of Le Franc Tireur seems rather inexplicable.

The magazine is a color magazine on glossy paper that resembles a recent issue of Le Franc Tireur in all but name. The articles are led by an overview of Free French forces that provide more historical context than OB data and which concentrates heavily on the early Free French rather than the later Free French (which made up the vast bulk of that fighting force). Given the complexities of weapons and armament that the various different Free French units had–including some that were British armed, some that were U.S. Armed, and some that were armed by the Free French themselves from a hodgepodge of sources (including German weapons), an article providing guidance on all of these issues would have been of some interest to ASL players and of great use to ASL designers. However, this article doesn’t do that; moreover, two pages of the article are almost completely obscured by the dark underlying artwork, so it is a bit disappointing.

Another article provides information on the ill-fated Panzer Brigades created by Germany in 1944 as a stopgap against onrushing Soviet and Western Allied forces. There is also content on a tank museum near Moscow, an interview with an American casual ASL player, a very long article providing impressions by an American ASL player of LFT’s Kampfgruppe Scherer, a one-page article on Board 55 (?), a historical article on the fighting around Lunéville, France, in 1944, and the rules and information needed to play the linked-scenario campaign game related to said fighting. The article on KG Scherer is the most substantial article of the lot.

One of the attractive aspects of this “pack” is that there are Free French aplenty here–they appear in six scenarios. Despite fighting in Syria, North Africa, Italy, Elba, France and Germany from 1941-1945 (as well as a couple of other spots), the Free French are severely under-represented in ASL.  One of the reasons for this lack is an almost criminal lack of English-language materials available on the Free French. Indeed, there is only one substantive work in English that focuses on them–the long-out-of-print English translation of the memoirs of Jean Joseph Marie Gabriel de Lattre de Tassigny, who commanded the 1st French Army (with considerable skill).  Thus is it always welcome when ASL’s French contingent can bring their own access to relevant materials to bear.

Four of the scenarios here–FT215 (Ghostly Attack), FT216 (Back in Force), FT217 (Cavalry Delaying Action), and FT218 (Taking Luneville)–may, if players so choose, be played in sequence as part of a linked-scenario campaign game. The rules for this provide additional OB options for the various sides in the scenarios, while winning or losing a scenario may have an effect on subsequent scenarios. However, it is not clear to me how one wins the campaign game.

The “pack” has gotten a reasonable amount of play since its release, with FT213 (Up the Liri Valley), FT214 (A Grain of Sand), FT219 (Koniev’s Finest), and FT223 (The Kings of Bollersdorf) having so far the best combination of popularity and balance. 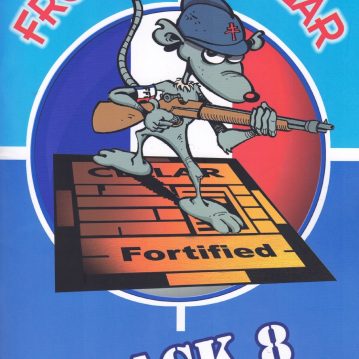