Newer ASL players purchasing a copy of High Ground 2 (HG2) may be forgiven for trying to find High Ground 1 on Bounding Fire Production’s Web site.  HG2 is not a sequel to an earlier BFP product; it is rather a reprint and expansion of another third party ASL product, High Ground!,  published in 2000 by Heat of Battle, to which BFP a decade later obtained the rights (it did not, however, obtain the rights to the exclamation mark at the end).

The original High Ground! was the first third party product to include a professionally rendered (and mounted) geomorphic mapboard.  It was also one of the only such products, as printing such boards had by that time become prohibitively expensive.  High Ground! also broke ground by breaking the geomorphic barrier; the two maps in that product were geomorphic only on three sides.  The two fourth sides linked together so that the two maps could be used to represent a large massif.  Alternatively, they could be set next to each other with the non-geomorphic sides out, so as to represent a big valley.  The maps were quite nice; the scenarios were, however, not particularly popular.

The switch in the mid-2000s by MMP to using unmounted geomorphic mapboards in the style of the ASL Starter Kit gave third party publishers a new avenue for creating their own maps, if they followed suit, as the unmounted maps were both cheaper to produce and less likely to suffer mistakes during the printing process.  BFP’s decision to print a new version of High Ground! offers newer ASLers a chance to get the boards in that product (and then some) without having to track down an expensive and long out of print item.  Alas, for those who do own the earlier product, BFP provides no “expansion kit” that would allow them to get the new maps and scenarios without re-buying the old.

HG2 includes 7 of the original 8 High Ground! scenarios and adds 9 new ones.  It also adds a large overlay of a castle on a hill (for those Monty Python scenarios) and two new geomorphic mapboards with (surprise!) hills on them.  BFP-J depicts three hills (one smaller two-level hill and two larger three-level hills).  The two larger hills, separated by an unlikely stream, represent either twin hilltop villages or one odd single village.  It might be suitable for scenarios set in places like Greece, Yugoslavia, or Italy.  BFP-K also depicts two close three-level hills separated by a stream, though in this case there is more foliage and fewer buildings.  It’s not quite clear what type of terrain this board is supposed to represent, as there are too many, and too large, buildings for wilderness terrain, but not enough to really represent a settlement.

The new maps are completely geomorphic and do not follow the non-geomorphic theme of the original maps.  It would have been nice to have continued in the vein of the original and used multiple maps to represent larger hill formations.  In any case, all four maps are well-rendered and attractive, as is the large overlay.  Only two paragraphs of the 4 pages of rules are relevant to HG2; the rest contain all the special rules for all BFP mapboards.  This is a nice touch that one hopes will be continued (some previous BFP products included maps with terrain features only defined in earlier BFP products).

The 16 scenarios are set in a variety of times and settings, including:  French vs. Italians (France 1940), Greeks vs. Italians (Albania 1940 & Greece 1940), Greeks vs. Germans (Greece 1941), New Zealanders vs. Germans (Greece 1941), Soviets vs. Waffen SS (Soviet Union 1942, Hungary 1945)), British vs. French (Madagascar 1942), Soviet partisans vs. Germans and Slovaks (Soviet Union 1942), Americans vs. Japanese (Guadalcanal 1943), Soviets vs. Germans (Soviet Union 1943 & 1944), British vs. Japanese (Burma 1944), Americans vs. Germans (France 1944, Belgium 1944), and Indians vs. Indian National Army (Burma 1945).  Several scenarios require unit counters or markers from BFP’s Blood and Jungle, while another scenario, HG14 (Tigers on the Hill), calls for an aircraft counter from Operation Cobra.  The latter is a pretty gratuitous requirement that should have used ASL’s generic aircraft counter instead.  Although it is nowhere specified on the packaging, one scenario also require Debris overlays that appeared in Into the Rubble.

A number of the scenarios have interesting situations.  HG15 (King Darges), features a group of 15 Waffen SS squads, with three guns and 7 AFVs defending a perimeter around a castle on the hill from a Soviet attack from all sides.  The Soviets have 29 squads, 2 guns, and 18 vehicles (as well as some OBA and Panzerfausts).   Fans of large, “classic” East Front scenarios might like this one.  HG6 (Damned at Demyansk), designed by surprise “guest designer” Dave Lamb, is smaller, but in the same vein.  This scenario has a Soviet force of 23 squads and 7 vehicles, liberally supplied with SW, trying to force their way through a cordon of 13 Waffen SS squads, 2 guns, and 1 AFV (plus some air support).  The Soviet force is considerably stronger (and also elite), but the terrain they must traverse is wicked indeed, and Deep Snow doesn’t make it any easier.

Another noteworthy situation occurs in HG2 (Konitsa Crackdown), which portrays a massive Greek drive down an Italian-defended valley.  The Greeks get VP for controlling buildings (down in the valley) as well as higher hill hexes, so actions will occur across the breadth of the playing area.  The Greeks have a whopping 30 squads, 8 crews (the scenario designer seems strongly to want MMG/HGM/MTR to be manned by crews, though he does not actually come out and require it), 7 leaders, and 4 guns.  The defending Italians include 15 first line and 5 conscript squads, 16 crews, 4 leaders, and 5 guns (as well as 10 MG and 6 SW MTRs).

Possibly the most interesting scenario situation is also one of the only tournament-playable scenarios in the offering, HG7 (Bonny Nouvelle), designed by another “guest designer,” Scott Holst.  In this scenario, depicting part of the Allied invasion of Madagascar in the spring of 1942 (a response to British concerns about Japanese intentions in the Indian Ocean), a group of 15 elite British squads, well led and accompanied by 5 mostly light AFVs, must  attack a Vichy French hill position.  The defending French have 12.5 squads and 5 MG, supported by 2 105mm artillery pieces and 3 venerable FT-17 tanks.  The British can score an immediate win through exiting, but they also face the possibility of an immediate loss through a CVP cap, so the scenario provides a fair amount of tension.

However, one scenario’s inclusion is of questionable taste:  HG8 (Perún’s Thunder).  This scenario is loosely based on an atrocity committed by the Slovak Security Division operating in the Ukraine in 1942 following partisans briefly shooting at on some Slovak trucks.  Although the scenario card sets up a situation that suggests considerable fighting, what actually occurred seems to have been little more than a massacre of unarmed civilians.  Sadly, it has gotten more play, as of this writing, than any other scenario in the product.

With the exception of the above-mentioned scenario, High Ground 2 seems like a pretty solid product, though its focus on large scenarios will limit the ability of many ASL players to play some of it.  For newer ASLers who never had an opportunity to get their hands on the original High Ground!, this is a chance to make things right, and then some.  For veteran ASLers who already have High Ground!, there is added value in this product, but they will be re-buying some stuff they already have.  Of course, if they bought High Ground! in the first place, they probably don’t have the willpower to resist this product, either. 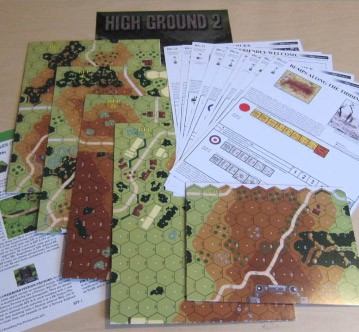