Home > Products > From the Cellar Pack 9

Actually, as a magazine, From the Cellar Pack 9 is a lot more modest than Pack 8, which had over 50 pages of magazine content. Pack 9 contains only 20 pages of magazine, none of which is substantial (content includes an article positing the playing of a scenario where one side rolled only 2s and the other side only 7s, a short historical article, and a comic strip).

The product also includes an Italian Nationality chart/play aid that was intended as an insert for Le Franc Tireur Issue #14 but was unintentionally left out.

That leaves the scenarios. Many of the scenarios are not original scenarios but rather are reprints. However, they will nevertheless be new to the majority of ASLers, because they are reprinted from the pages of the long-running French wargaming magazine Vae Victis, which for many years has included one or more ASL scenarios in most of its issues–but in French, not English, making them rather inaccessible. LFT says that some have been “slightly readjusted” for balance. The cards do not contain information about the Vae Victis issue in which they originally saw print.

The scenarios represent a pretty balanced mix of small, medium, and large-sized actions. Two scenarios utilize both OBA and Air Support; no scenarios use the Night rules.

Several of the scenarios depict interesting actions. FT273 (Former Foes), a scenario set in Indochina in October 1945, features British (Indian) and Japanese troops fighting on the same side against Vietnamese guerrillas (it also features randomly appearing guerrilla units). The British used Japanese units in Vietnam and on the island of Java to help maintain control after the Japanese surrender; thus the strange bedfellows (you can find another such scenario here).

FT269 (End of the Rope) is a nice little scenario set in Hong Kong that features a Canadian/British attack (the Canadians using Allied Minor counters!) against a small Japanese position on a hill. The British have some strong supporting elements but these can’t move until at least one Canadian unit gets to a Level 2 hill hex. Your Humble Author had fun playing this scenario at ASLOK 2019.

FT266 (A Fine Mess) features a 1940 French attack (with 5 S35s) against a small but well armed force of Germans. In contrast, FT267 (Thugny-Trugny [the name of my 13th level half-troll fighter/magic-user]), is large and meaty France 1940 action with a German attack/French counterattack featuring 25 squads and 5 AFVs against 20-odd French infantry and motorcyclists. Lots of action in this one. FT261 (The Battle of Algiers) features a relatively rare American-Vichy French action depicting the Americans’ ill-fated Operation Terminal.

Overall, the scenarios are a good mix of actions, with a lot of interesting situations–and there are a lot of scenarios. That makes this product worth getting.  The magazine could have easily been left out entirely, though, as it adds little additional value. 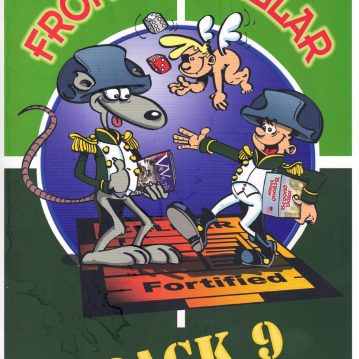