3rd Edition (Bitter Tag: The Push to Hannut 1940): Desperation Morale has not examined its contents and cannot verify them. Critical Hit product content descriptions are often incomplete and also often inaccurate. This product apparently has 6 nonstandard 12" x 18" unmounted geoboards and 9 scenarios. It also has a 5/8" half-countersheet with 88 counters.

Gembloux is a series of 8 geomorphic-map scenarios designed by Tim Robinson and Pedro Ramis, featuring conflict for the French village of Gembloux during the 1940 campaign in France.  A Platoon Leader campaign game (“Lost Sentinels”) is also included (using geomorphic maps, not a historical map).  There is some nice early war armored action in these scenarios, though ASLers who dislike air support should note that it is featured in a majority of the scenarios in the pack.

2nd Edition Comments:  In 2011, Critical Hit, having gone over to a new style of artwork for its 5/8″ counters, started re-issuing many of its older products in a fairly transparent attempt to get people to re-buy them in order to get the new counters.  The 1997 Gembloux: The Feint is one of these re-issues (titled Gembloux II:  The Battle of France 1940 on the front of the package, but Gembloux the Feint II on the front of the rulebook), though its release is perhaps not as gratuitous as some of the others, as it has been many years since the product originally came out.

The counters themselves are basically gratuitous; there is no really need to ever punch them if a player has Croix de Guerre.  They are thus only a selling point for the gullible, really.

Theoretically more interesting is a new geomorphic mapboard (dubbed CH1), which replaces a village overlay provided in the original.  This is the first attempt at a geomorphic mapboard that CH has made in some time.  It is a fairly unremarkable board, featuring a somewhat bifurcated village surrounded by orchards, fields, and woods.  It is used in 3 scenarios–GTF 2 (Bitter Day), GTF4 (Thisnes at Dusk), and GTF6 (Without Thought of Retreat).  However, the value of a Critical Hit geomorphic mapboard is questionable.  Critical Hit has not supported (i.e., used in subsequent products) any of its previously released similar mapboards; moreover, these days, the number of geomorphic map scenarios it produces at all is extremely limited.  Consequently, one has to wonder if this board would simply gather dust or if it might actually be used.  Unless Critical Hit starts publishing more geomorphic map scenarios, it is far more likely to gather dust.

Moreover, this board was one of a batch of new boards Critical Hit designed and printed in late 2011 for various projects, and all of these boards have problems.  Some of them are not cut to the precise size needed.  However, all of them seemingly have the problem of a slightly undersized hexgrid which makes it impossible to line the maps up correctly against an official map (see images below).  It is hard to see why this error would not have been caught before being passed on to consumers.  It greatly lessens any value the new geoboard might have brought to the product.

The scenarios are the same ones as in the original edition, with the language tightened and some of the scenarios tweaked slightly for balance.  Thankfully, the gratuitous scenario tweaking and renaming that have accompanied a number of other past Critical Hit reprints are not present here.

About half the scenarios are small in size, with the other half divided between medium- and large-sized.  Five of the scenarios use Air Support rules; two scenarios use OBA; one scenario uses Night rules.  One scenario, GTF1 (Caught Napping), is a tiny all-armor scenario (two armored cars versus four tanks).  As the general theme of the pack is a large-scale armored action, a number of the scenarios feature early war AFVs, and fans of such actions can find some choices here.

For owners of the original Gembloux, there is probably not enough here to truly warrant buying the product over again, despite the presence of counters and a map.  For people who never owned Gembloux before, this might be worth trying.  However, with a listed price of $59.95, the product is seriously overpriced and represents a bit of gouging on Critical Hit’s part.

For this new edition, Critical Hit has abandoned using official ASL geoboards and created new geoboards (GB1-GB6) of a nonstandard (12″ x 18″) size–essentially taking the standard map panel that they now use for historical modules and using it as a basis for geoboards–presumably geoboards with terrain similar to the official geoboards they replaced.  Ostensibly the geoboards are based on historical terrain but that is a Critical Hit claim that should be taken with more than a grain of salt. It is not clear that any of the scenarios were re-playtested using the new boards.

The original Gembloux contained 8 scenarios; this product includes a 9th, a monster-sized scenario designed to replace the Platoon Leader campaign game of the original product.  The product description says nothing about counters being included but one ASLer who purchased the product said that there is a sheet of “armor counters” in the product.  That seems to be verified by the Noble Knight photo, which shows a 5/8″ half-countersheet.

The product is currently priced at $79.95, which is fairly expensive. 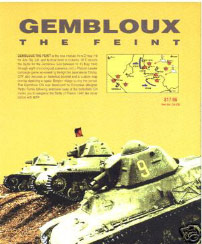