Graziani’s Advance (GA) is a small scenario pack from Critical Hit that represents an attempt to salvage and reprint some of the materials from Critical Hit Magazine’s 1999 “Operation Compass” Special Edition.  That issue of the magazine featured a huge passel of scenarios and a historical map depicting combat actions in North Africa between the British and Italian forces from the summer of 1940 until the appearance of Rommel and the Germans on the scene in early 1941.

The “Operation Compass” issue was not particularly popular upon its release and the scenarios within have not been played much, in part because they developed a reputation for poor balance (the designer even admitted that balance was not a big concern of his).

However, 15 years later, here they are again, or at least some of them, in what Critical Hit’s marketing copy has described as a “pile of scenarios from the 1940 campaign through the fiasco at Beda Fomm, remastered to the point of new from their Op Compass editions and then some—plus new scenarios never before published.”

Additionally, Desert War: 1941 and Graziani’s Advance combine to form a sort of Critical Hit alternate version of West of Alamein, with boards, overlays, a pseudo-ruleset, and British, German and Italian counters (see Desert War: 1941 entry for more detail on all of this).

GA contains no geoboards or historical maps.  Rather it uses the desert geoboards and overlays created by Critical Hit for Desert War: 1941.  It does come with two sheets of additional overlays.  Sheet 1 has three one-hex hillock overlays and a larger “Pimple” overlay to allow the recreation with geoboards of the historical map that originally came with “Operation Compass.”  Sheet 2 includes a fort overlay, an ammo dump overlay, an encampment overlay, two hillock overlays, an orchard overlay, and a wadi overlay.

The pack also comes with two full countersheets, which primarily depict the Italian OB.  As such, they are duplicates of existing official counters and not needed for play.  The countersheets do include a few inconsequential “new” counters, but these are along the lines of model names for Italian trucks rather than generic trucks.  Most of the one page of rules included with GA is taken up by listing these vehicles.  The 5/8″ countersheet used for this write-up had poor registration, resulting in some of the counters being poorly die-cut (including a few with parts of the counter information cut off).  Otherwise, the counters are attractive enough.

GA comes with 8 scenarios (unlike a number of other Critical Hit products released around this time, these scenario cards have no color on them):

As one can see, contrary to Critical Hit marketing material, there are no “new scenarios,” only recycled ones.  The scenario changes range from pretty minor to, in the case of GA8, a complete overhaul.  Some of the changes are arbitrary tweaks (a Critical Hit specialty), but most of the changes seem to be for the better.  SSRs and VC are cleaned up, some rules abuses eliminated, leadership is generally reduced (Pat Hair had a hair up his butt for crazy-powerful leaders), and there is overall more quality control.

The GA versions certainly seem better than the originals and these changes might make some of them worth playing.  However, the completely unreasonable price for this product makes taking a chance on GA a bad proposition.  GA sells for between $60-$65, which is a quite outrageous price for a product with no maps and only 8 retreaded scenarios.  This is a product that might be reasonable at around $25, but it is priced at over twice that amount.  Not by any stretch of the imagination is it worth it. 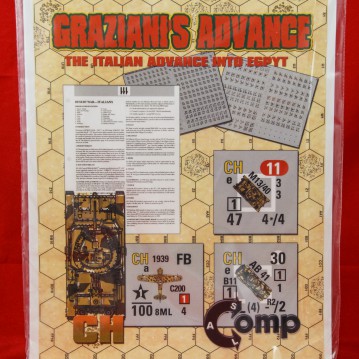