Note: In 2015, Critical Hit published a new version of this module, broken into two halves, SCW1 and SCW2.  Desperation Morale policy has generally been to give new pages to such broken-up products, to avoid more confusion, so see those pages for later versions of this product.

Along with Genesis ’48 and Dien Bien Phu, Guerra Civil (GC) was one of three historical-oriented products released by Critical Hit early in the 21st century which were designed to have much more depth and better quality (by the standards of that time) components than its earlier historical modules.  Unlike the other two, which use historical maps, GC is really a large scenario/map pack using geoboards.

Certainly Critical Hit did not stint with the components here.  The geomorphic mapboards are decent (it is just a shame that neither Critical Hit nor other third party designers have taken advantage of these mapboards in other works) and there are plenty of other components.  Only the counters are sub-par.  Not only do they feature Critical Hit’s hard-to-understand AFV counter layout, but the artwork on the MMC counters is static and uninteresting.  Moreover, the counters are thick and were not die-cut especially well.

GC deals with the Spanish Civil War, one of several attempts by third party publishers to represent this conflict in ASL terms.  It was designed by Juan Carlos Cebrian and Francisco Javier Cebrian and is clearly a labor of love.  The 16-page rulebook is mostly taken up by rules for the various combatants in the long struggle and notes for the new AFVs.  The Republicans have Regular Army troops, Northern Army troops, guerrillas, and militias.  For flavor, they also have Basque priest counters who act as field chaplains.  The Nationalists have Regular Army troops, troops from right-wing Monarchists and Falangists, African troops, and the Spanish Foreign Legion–as well as their own field chaplains, the Navarrese Carlist priests.  What is particularly nice about all of these units is that, though they do have their own counters, they all use established squad types (4-4-8s, 4-4-7s, 4-3-6s, 3-4-7s, 3-3-7s, 4-5-8s, 4-5-7s), and not gratuitously different squad values (a problem particularly in Genesis ’48).  Thus Guerra Civil combines the novel with the familiar and doesn’t seem too “out there.”  Moreover, there is just enough “flavor” in the different units without loading them up with huge amounts of chrome.  The designers did a good job creating and characterizing the two opponents.

The 12 scenarios, 8 of which use at least one of the included geomorphic maps, take place from 1936-1938 all across Spain.  They definitely tend towards largeness (a common trait among novice scenario designers); the smallest scenario is still medium-sized.  Nevertheless, though considerable in size,  they have few special rules and are not hard to play.  For people who like meaty scenarios without exotic or complicated rules, this may be just the ticket.   There is no campaign game included.

Overall, despite the less-than-perfect counters, this is a passable product and worth getting for those interested in this conflict.

Critical Hit Magazine Volume 7 Number 3 contains two scenarios for Guerra Civil, one of which uses the SCW geomorphic mapboard and one that uses an SCW overlay.

2nd Edition (Condor Legions) comments:  In 2011, Critical Hit went over to a new style of counter artwork for its vehicles and guns and as a result, embarked upon a program of reprinting many of its products with new counters to replace the original, poorly-designed ones.  Condor Legions is one such example, being in actuality a reprint of Guerra Civil, though horribly re-named (given that the “Condor Legions” were a tiny and non-Spanish part of the Spanish Civil War).

The original counters for Guerra Civil were quite bad, both graphically and physically (being printed on large sheets of cardboard with a die that was apparently never used again).  The new style counters are definitely a step up in physical quality and also in terms of vehicle/gun layout.  However, the Nationalist counters are still not up to par because of their color, a very dark green.  It is often difficult to make out the black counter values against this dark green.

The second edition also includes new versions of the geomorphic mapboards that appeared in the original.  Sadly, these are problematic.  These maps are part of a batch of maps that Critical Hit designed or re-drew in late 2011.  All of these maps suffer from problems.  Some of the maps are not cut quite correctly.  However, the major problem is that all of them suffer from a slightly undersized hexgrid, which makes it impossible to line the hexgrid up against the hexgrid of an official map, and which leaves gaps at the two long edges.  This problem is immediately visually obvious, as the map cut extends beyond the hexgrid artwork, so there is no excuse for including these maps.  They needed to be redone and reprinted.  No ASL player likes to play on bad maps.

In addition, the new artwork on the maps includes a bizarre “gloopy” style of grainfields, which makes them look more like alien amoebas than actual fields.  The overlay, labeled SCW1 but referred to on the scenario card as SCW3, is also weird, containing two groups of orchard hexes, each with a different orientation (and no explanation for this).  Moreover, players report that it is mis-sized.

A large number of scenarios use one (or, in one case, both) of these maps.  Map SCW1 is used by scenarios SCW1 (La Muela), SCW6 (Guadalajara Offensive), SCW9 (The Boys of Summer), SCW13 (Bridegrooms of Death).  Map SCW2 is used by scenarios SCW2 (General Solchaga’s Orders), SCW3 (Bayo’s Columns), SCW4 (Sons of Abraham), SCW6 (Guadalajara Offensive), SCW8 (Along the Ebro), SCW12 (Basque Citadel), SCW15 (Convent of the Dead).

The scenarios include the original Guerra Civil scenarios, as well as the additional ones that appeared in Critical Hit Magazine, plus a couple of new ones.  Almost all of the original scenarios have been renamed.  Many of them have had changes made to them–in one case even replacing a mapboard with Board 56, from Action Pack 5.  The product packaging does not note that this product is required.  Of the two newly designed scenarios, one, SCW16 (The Devil’s Island), uses ASL Starter Kit maps s and t.  The product packaging does not note that any Starter Kit items are required for play.  The product packaging does inform people that the Partisans module is required to play the game, but it seems that Armies of Oblivion would do just as well.

For people interested in the Spanish Civil War, this module is one of the more complete third party attempts to provide related material, and it has been out of print for a long time.  Thus people might well be interested in purchasing it.  However, with less than great counters and maps that players will have cut themselves if they want correct versions (a daunting task), the reprint was not handled well.  The product deserves better than it got.

One additional aspect must be mentioned–the significant overpricing of this product.  This product originally listed at $149.95, according to the Critical Hit web site, though this was later reduced to $89.95.  Even at the lesser price, the product is far more expensive than it should be, given the components included and the fact that it is a reprint and not an original work.    This product should have been more legitimately priced around $45 or $50.  Critical Hit is significantly overcharging for this product.

3rd Edition (SCW1 and SCW2) Comments:  In 2015, Critical Hit published a new version of this module, broken into two halves, SCW1 and SCW2.  Desperation Morale policy has generally been to give new pages to such broken-up products, to avoid more confusion, so see those pages for later versions of this product. 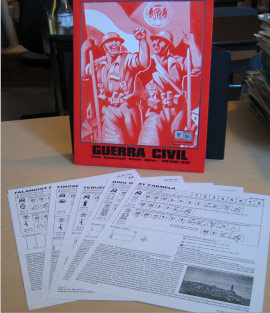