Gung Ho concludes the introduction of the PTO to ASL.  It includes the Chinese (both Nationalist and Communist), the US Marine Corps, and early war Filipinos.  It also introduces new rules such as amphibious landings and caves.  Although aficionados of the USMC will love this module, which allows them to recreate actions from Guadalcanal to Iwo Jima, it is one of the less successful ASL modules in conception.  One reason for this is the portrayal of the USMC, who are (probably inaccurately) given a higher morale than other elite US forces, and whose late war squad is represented as the most powerful infantry unit in all of ASL.  Additionally, USMC forces (who were, after all, only a handful of divisions among tens of millions of combatants in World War II) are represented with four different squad types, which is probably twice as many as needed.

Also problematic are some of the rules added with Gung Ho, some of which are extremely complicated, more than they needed to be–in particular the amphibious landing rules.  Landing craft, beaches, NOBA, and every other facet of amphibious landings are represented in excruciating detail.  The great complexity of these rules mean that many people are intimidated into avoiding them (and in some cases, avoiding the whole PTO).  The cave rules are also quite complex. 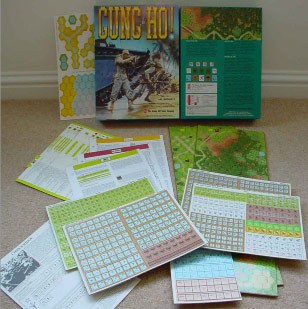