Contents:
Desperation Morale has not examined this product and cannot confirm any claimed contents. However, it appears to include 4 11" x 16" unmounted geoboards, ? pages rules, 8 scenarios, 1 1/2" countersheet (280 counters) and 1 5/8" half-countersheet (88 counters).

GWASL 5: Hapsburg Ambitions is a Critical Hit historical module published in 2019 not for regular ASL but for Critical Hit’s GWASL World War I variant set of rules, of which, for the record, Desperation Morale does not have a high opinion.  ASLers should read the Desperation Morale write-up for the first GWASL module to understand the nature of this series. That module is also required in order to play this one. However, Critical Hit also claims that all preceding GWASL modules (4 total) are needed for this module. That certainly is not true in terms of counters (the Austro-Hungarians never fought the Americans), but possibly might be in terms of maps.

GWASL 5 introduces the armed forces of the Austro-Hungarian Empire to the GWASL series, providing rules and counters for that combatant, as well as a handful of scenarios (see below, from the ASL Scenario Archive). The scenarios are all East Front scenarios, so no actions in Italy, Serbia, or Romania.

The module also comes with 4 new geoboards (presumably 11″ x 16″, although Critical Hit marketing copy does not specify) and a small number of Austro-Hungarian counters (ostensibly 1 sheet of 280 1/2″ counters and 1 half-sheet of 88 5/8″ counters, although Critical Hit also makes reference to possible “bonus” fortifications countersheets depending on how many modules purchased.

The module is currently priced at $89.95, which is quite a lot for a scenario/map pack with only 4 geoboards and 8 scenarios.

Around the same time as this module’s release, Critical Hit also released–for separate purchase–a “HotHex” version of the boards here, which seems to be a larger-hex version.  Critical Hit claims that “each map found in the module is provided as a 22″ × 34 set of 4 linking boards.” 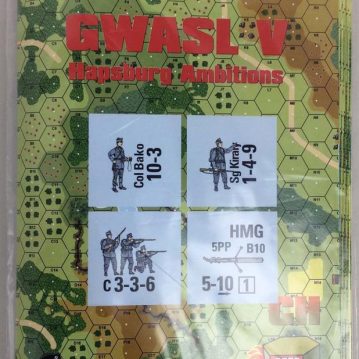