GWASL II:  Blasted Woods, hereinafter simply GWASL II, is the second module in Critical Hit’s unfortunate attempt to use the Hot Tub Time Machine to take ASL back to World War I, a conflict for which ASL simply was not designed.

Desperation Morale has written a very detailed write-up of the first module in the series, GWASL I: Tankschreken! [sic], and it is assumed that readers of this write-up will have already read it.  This write-up will not repeat that analysis, but will focus on what is added or different or notable.  In, other words, GO READ THAT OTHER WRITE-UP.  We’ll wait for you.

GWASL II’s main feature is adding the French to the system, though it also includes some geoboards.  GWASL began originally as a project of British ASL designer Ian Daglish, who died before it could come close to completion.  Ray Tapio stepped forward to get GWASL I into what he, in any case, decided was a publishable form.  In GWASL II, Ray Tapio states that “some of the scenarios and special rules found in GWASL 2 were designed by Ian Daglish,” but for this module, he brought in wargame designer John Gorkowski, who has designed both tactical and strategic level World War I games, to help, though he does not state what, exactly, was Gorkowski’s contribution.  No playtesters are mentioned at all, which is always a bad sign when it comes to Critical Hit.

The 6 pages of rules that come with GWASL II do not replace the original rules from GWASL I or supplement them, but are a seemingly arbitrary mix of new and old, with the result that players will still need to consult the GWASL I rules and will have to remember which rules are contained in which module and which rules in the first were changed in the second.  It is clear that the GWASL II used the GWASL I rules as a template, because there are some places where Ray Tapio forgot to change the language, as when he states that “this release includes German and British units.”  Of course, it does not; that was GWASL I.  GWASL II only contains French units.  The rules seem to contain one implicit clarification, regarding Beaten Zone Fire Lanes, introduced in GWASL I, by including an image of a fire lane residual firepower marker, which would seem to indicate that this is the type of RF marker left (it was not clear in GWASL I).

The French in GWASL are represented by the following squad types:  5-3-8 elite, 5-3-7 1st line, 4-3-6 2nd line, and 3-3-5 green.  This means that the French have the highest squad firepower so far in the GWASL system (indeed, higher than in regular ASL).  There is no explanation as to why this is so, or why all their squads have such a poor range.  Indeed, there are no designer’s notes in GWASL II at all, unlike the first module, so many design decisions are simply a mystery.  There is no squad type for the French Foreign Legion.

The French get a special rule for Attaque À Outrance (“attack to excess” or “attack to the last”) to reflect their early war doctrine.  It is a form of human wave which can be declared by a good order SMC if he passes a TC.  TC failure can possibly cause units to be pinned.  At least one MMC must participate (although heroes can do it by themselves).  Targets cannot include AFVs.  The rule really doesn’t seem like it is qualitatively better than simply allowing the French to do normal human wave attacks.

French units may also set up 20% of their OB with Élan (described in the write-up for GWASL I).  Other than that, there is little to differentiate the French from other nationalities.

“Chapter H” style listings are included for a few French guns and vehicles.  Amazingly, only two French artillery pieces are listed!  They do not even get a Stokes mortar.  This is rather bizarre.

There are few other rules introduced in GWASL II.  There is a terrain rule for “decimated woods.”  There is also a reduced firepower demolition charge.  The one significant new rule introduced is poison gas, which uses simplistic rules to represent all different forms of poison gas equally.  Gas is a form of SMOKE, but it is only one level high and always sinks to the lowest level of a hex, including trenches.  All units in a Gas location take a 3MC.  There are no rules for lingering gas.  Units with Gas Masks get a -2 DRM to their MC if Good Order.

The counters that come with GWASL II represent the French OB, plus a few markers, such as Gas and gas mask markers.  They are generally attractive.  One of the counter sheets has a darker shade of blue than the others, as it includes some concealment markers, some might find it irritating.

GWASL II includes 4 geoboards, of a sort.  They come on heavy paper and are untrimmed–there is extra space all around the edges of the hexgrid that has to be manually trimmed off using scissors, a rotary blade or some other form of cutting device.  This is very irritating.  The geoboards (M, N, O, P) are of the 11″ x 16″ Gary Fortenberry-style of geoboard introduced first in Action Pack 6.  However, they use the graphics of the Sweet 16 series of CH geoboards, the relevance of which is that most building graphics, if not lined up perfectly horizontally or vertically, come out looking crappy:  pixelated, jagged, and crude.  A definite downer.

The boards of GWASL I were actually just slightly modified versions of previously printed Sweet 16 geoboards–certainly frustrating for people who ended up buying the same boards twice.  The GWASL II boards may be original rather than derivative (we have not dug up all of CH’s previous boards of this style to check).  Generally speaking, the 4 boards are flat and open, usually with nothing higher than small level-1 hills.  Board M is an exception; half of the board consists of a large 2-level hill.  The other half contains a small village consisting mostly of one-hex buildings.  Unlike the boards of GWASL I, where woods had generally been converted into brush, this board actually does contain woods hexes.  Board N is the only GWASL board so far (both modules) that looks as if it might have been designed for a World War I scene.  Half of it includes a heavily shelled landscape.  The other half contains a bit of woods, a bit of valley, and a large area of brush.  Board O contains a valley, two large areas of brush, and a couple of small hills (including a single level 2 hex).  It is possible that boards N and O originally had woods where the large brush areas are.  Board P is a farmland board with large grain fields and a tiny hamlet of about a dozen small buildings.

GWASL II contains only 8 scenarios, all set in France, from throughout the 1914-1918 period.  They tend somewhat to the large, with over half the scenarios being that size and the remainder small or medium in size.  Three scenarios have OBA (including two with Gas).  One scenario has Air Support.  No scenarios are Night scenarios.  Five scenarios have a number of trench counters, though because there are no rules in GWASL regarding trenchline placement, they are not likely to actually resemble in play the trenches of WWI.  Three scenarios have AFVs.  The French get at least 1 hero in 7 of the 8 scenarios.

The meatiest scenario is GWASL17 (Baptism of Valor), which depicts part of the 1917 Nivelle Offensive, apparently the Chemin des Dames, though this is not clear.  This French attack pits 30 French squads, 7 leaders, 2 heroes, and 17 AFVs against a German fortified position manned by 24 squads, 6 HMGs, 8 guns, and 2 AFVs.  The Germans also get two modules of 100mm OBA as well as two Fokking aircraft.

At $99.95, this is a very expensive product (especially when you have to buy another $99.95 product in order to play even a single scenario).  Plus, it doesn’t actually come close to simulating World War I. Even for obsessives, there is no reason to buy this.

2020 Update #2: In 2020, Critical Hit released what it called the “GWASL French 1914-15 NAT Set,” selling for $39.95, which appears to be the GWASL French counters with different counter artwork (featuring the French in their early war uniforms of blue coats and red pants). 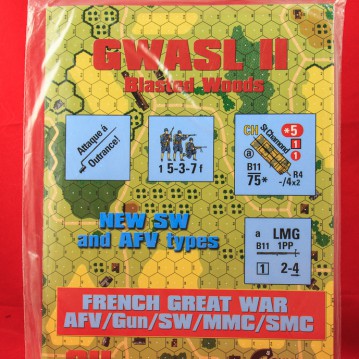