The Hakaristi Finland die is a 1/2″ (12.5mm) custom precision die in Battleschool’s “Nationals” series of dice, which consists of dice representing various nationality or combatants (including some extremely marginal/dubious ones) of World War II.  All dice in this series are white with black pips and have a nationality-related symbol where the 1-facing normally would be.

People familiar with these dice may think they remember that Finland was already represented in the series and those people would be right.  A Finnish die was introduced in the very early Axis and Allies Pack back in 2010.  Is there some sort of reason to issue another Finnish die?  No.  No valid reason at all.

This particular die features a blue-foil “hakaristi” instead of the 1-facing.  In case you were curious, “hakaristi” is the term  used for a Finnish swastika.  Why Battleschool would want to substitute a die with a swastika on it for a perfectly serviceable Finnish nationality die is hard to comprehend. 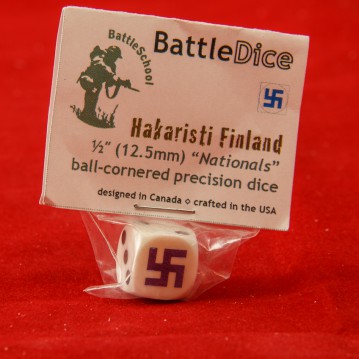