The Hell on Wheels Battle Pack was an impressive DTP scenario pack designed by Chas Smith (who later became one of the principals at Heat of Battle) with the help of many members of the Austin ASL Club.  The production quality was not particularly high (though it was not actually bad), but the play value was considerable.  The “battle pack,” as it was termed, concentrated on the U.S. 2nd Armored Division in its battles in Sicily, Normandy, the Siegfried Line, the Battle of the Bulge, and the Rhine campaign.

The mini-magazine (ostensibly 12 pages long, but really 28 pages, because all the scenarios are in it as well) featured a history article on the 2nd Armored Division by Chas Smith, an article on using armor in ASL by Matt Shostak, and examples of AFV combat in ASL by Chas Smith.  The unmounted DASL map is crudely done, but was for many years the only DASL map outside of Streets of Fire and Hedgerow Hell (there is now another, also created by Chas Smith, which appeared in Recon by Fire #2).  The battle pack also includes an SASL Mission (Get Me That Bridge!) and the unique appearance in ASLdom of a “guest scenario”–a scenario (GSTK8, Premature Evaluation) designed as a scenario for the Heat of Battle Arnhem historical module, God Save the King.

The 13 other scenarios featured a range of actions, tending heavily towards large scenarios (there are 2 small scenarios, 3 medium-sized scenarios, and 8 large scenarios).  Not surprisingly, they tend to be armor heavy.  Three of the scenarios are DASL scenarios, all of which feature the included DASL board (HOW5, The Narrow Front; HOW6, From Bad to Wuerselen; HOW9, A Perfect Match).  Two of the scenarios have air support and six of them have OBA.  Some of the best scenarios from HoW included HOW1 (Guns of Naro), HOW8 (Merzenhausen Zoo), HOW11 (Inhumaine), and HOW12 (Lee’s Charge).  The scenarios were well designed and well playtested, and this shows.  A number of scenarios from this pack were later reprinted by MMP as official scenarios.

It is interesting to note that, when Chas Smith would restart Bounding Fire Productions 8 years after publication of this product, there was considerable continuity in terms of the contents and other design elements between old and new products, despite the large gap. 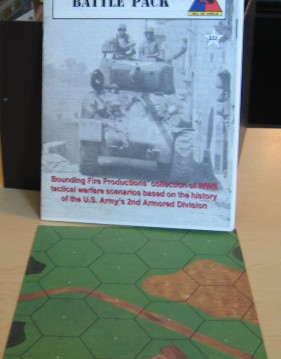