Alternative Titles/Edition History:
Original Edition (Heat of Battle, 2000).  In 2010, Bounding Fire productions published a revamped and considerably expanded version dubbed High Ground 2, which is treated here as a separate product rather than a second edition.

However, with HG, Heat of Battle actually accomplished an innovation that neither “official” publisher of ASL products, Avalon Hill or MMP, ever tried.  The two geomorphic maps in High Ground! are not completely geomorphic, but rather mate with each other along one edge to form a massive hill feature (the other three edges are standard geomorphic edges).  The maps can also be reversed to form a similar valley.  All other geomorphic maps in ASL, ASLSK, and in other third party products are slaves to the principle of self-containment, save for woods half hexes.  But the maps in HG show how larger features can be represented within the ASL geomorphic map framework.  Moreover, the two maps are extremely well-rendered and fully the match of any official geomorphic map in the quality of both artwork and assembly.   Heat of Battle can deservedly be proud of this achievement.

Such maps cry out to be played on, and HG also allows that opportunity with 8 scenarios that span every theater of war from North Africa to the Balkans to the Southwest Pacific to Italy and the Eastern Front.  The scenarios are a nice mix of sizes, from small to large.  The better scenarios include HG3 (Bumps along the Tiddam Road) and HG6 (Corniche Game).

The only drawback to the boards in High Ground! is that they have not been supported as much as they could be by the ASL community.  While it is true that because of their specialized nature they would not be among the most commonly used boards even if they were “official” geomorphic mapboards, and it is also true that, due to the politics of ASL, HG boards will never show up in any MMP scenario or Critical Hit scenario, other ASL scenario designers could make more use of these boards than they have.  Certainly the boards are good enough to deserve it.

2011 Update:  In late 2010, Bounding Fire Productions, another third party publisher, obtained the rights to this product and published a revamped and expanded version, dubbed High Ground 2.  This product contains re-done versions of the maps in High Ground!, most (but not all) of the scenarios, some new scenarios, and two new maps.  The maps are unmounted, in ASL Starter Kit style. 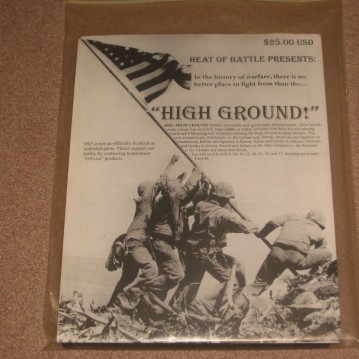