Originally scheduled for 1995 but not appearing until the following year, Jatkosota was Critical Hit’s first themed scenario pack, designed by Ray Tapio with help from Tommi Syrjanen and Pete Mudge. As Tapio is of Finnish descent, it is not surprising that the theme for this scenario pack would feature actions from Finland’s involvement in the Nazi campaign against the Soviet Union, known in Finland (and only there) as the Jatkosota (or Continuation War). The 12 page historical booklet contains brief articles on a variety of related subjects, as well as one page of what are essentially Chapter H notes for the included vehicular and SW counters (there is also a Tapio leader counter).

The 8 scenarios, which feature new counter artwork designed to look less like “official” ASL artwork, portray 6 Finnish-Soviet clashes and two Finnish-German actions (after the Finns changed sides). Worthy scenarios include Jatk #2 (Forests of the North) and Jatk #7 (Brothers in Arms).

Many years later, Critical Hit released another Finnish scenario pack, Finland at War, Volume I: Jatkosota. Despite the similarity in names, it was not a reprint or new version; the later release was quite different from the former and constitutes a completely different product.

In 2012, Critical Hit combined updated versions of both Jatkosota and Finland at War into one product: Fire & Ice: Finland at War, 1939-1945.

In 2015, Critical Hit used some of the materials here for Betrayed by General Winter. 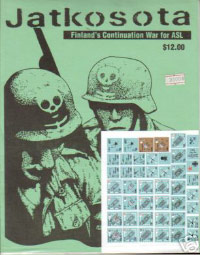