Betrayed by General Winter (BGW) contains 8 scenarios set in Finland during the period 1939-1941.  It is a rather cynical recycling attempt by Critical Hit–none of the scenarios here are original.

The scenarios here were originally designed in Jatkosota, an early (1996) Critical Hit product featuring Finnish troops, and Finland at War, a 2004 CH product with more Finnish material.  In 2012, these two modules were combined and rejiggered, along with some other previously printed Finnish scenarios by CH, as Fire & Ice: Finland at War, 1939-1945.  This version introduced 4 new unmounted geoboards, the first CH product to feature winterized terrain.  It is not clear if any of the scenarios to which the new boards were added were re-playtested.

Now, only a few years later comes BGW, a much slimmed down and less ambitious Finnish module.  Its eight scenarios, which focus on the Winter War, are rejiggered (and sometimes renamed) versions of scenarios that previously appeared in Fire & Ice (and thus before that in other products still).

The difference–and essentially a major problem–is that these 8 scenarios have once more had boards substituted.  Rather than the original official geoboards for which these scenarios were actually designed, as well as rather than the Critical Hit winterized boards W1-W4 (which apparently have completely been forgotten, though they are only a few years old), Critical Hit has made it so that these scenarios require boards from CH’s “Sweet 16” series of geoboards (which are rip-off “alternative” versions of official ASL geoboards).  Officially, CH says that one needs the “winterized” Sweet 16 geo boards (this and its two sequels), but the non-winter ones would do as well.

The problem, of course, is that they are all mind-bogglingly expensive (as well as being bad), and have Desperation Morale consumer alerts attached to them.  However, BGW requires one to have all three sets of these boards to play the scenarios therein (the board that comes with BGW, x62, is used in only one scenario–and requires another board as well).

As of this writing, it would cost $280 to purchase those three products, and another $50 for BGW itself, meaning that this recycled scenario pack requires an investment of $330 to be played.  If you have $330 to throw away in this manner, just send it to Desperation Morale instead and we will use 99% of it for beluga caviar and 1% on needy orphans.

There is, by the way, no evidence provided that any of the scenarios were actually re-playtested using the new boards assigned.

The one board included, x62, is not really a geoboard but a geoboard kit.  Printed on two sheets of heavy paper, it must be trimmed on all sides with scissors or a cutting device, then assembled to form the actual board.  It contains the building-related graphical flaw that all of CH’s recent geoboards have had (click on any of the Sweet 16 products for a more detailed description).

The countersheet included is a small throwaway countersheet from Finland at War, over a decade old but included apparently because extra stock was still lying around.  It contains the “old-style” Critical Hit vehicle layouts which are for all practical purposes incomprehensible and unusable.

Because of the unoriginal nature of this product, because of its price, because of its reliance on an outrageous amount of other CH products for play, and on general principles, BGW gets a thumbs-down and a Desperation Morale CONSUMER ALERT warning. 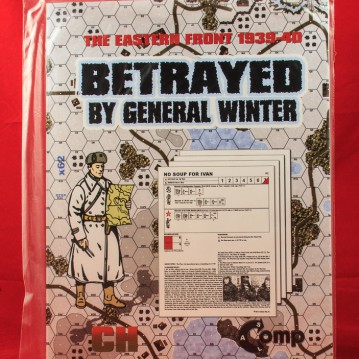