Finland at War, with its Jatkosota subtitle, is often confused with the older Critical Hit scenario pack bearing a similar name, but it is a completely different product, and not merely a reprint or facelift of the former. The confusion has probably cost Critical Hit a few sales. However, this new product is very attractive.  Although the title proclaims “Volume I,” there has never been a Volume II, as is the case with the majority of such Critical Hit proclamations.

Perhaps its most attractive element are the two mounted half-sized geomorphic mapboards (essentially, placed together, they are the equivalent of one normal geomorphic mapboard), which were fairly well done (for the time; Critical Hit map artwork has improved quite a bit since then). They depict sparsely settled terrain with a few small hills.

The countersheet is less appealing, primarily because half of the counters are 5/8″ vehicle and gun counters done in the unique (but non-intuitive and hard-to-read) Critical Hit format. The other half are 1/2″ counters, including a new type of (5-5-8) first line squad and Finnish tank-hunter-heroes. For some reason, the decision was made to print them in blue, the color used for the Finns in the 1st Edition Beyond Valor, rather than light gray, the new (and presumably permanent) color for the Finns that has been standard since 2nd Edition Beyond Valor.

The 10 scenarios (four of which use one or more of the included mapboards) have not received much play, which is unfortunate, because most of them are tournament-sized and many look quite interesting. Overall, this is one of Critical Hit’s better products.

In 2012, Critical Hit combined updated versions of both Jatkosota and Finland at War into one product: Fire & Ice: Finland at War, 1939-1945.

In 2015, Critical Hit used some of the materials here for Betrayed by General Winter. 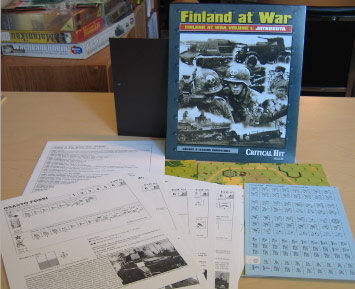