Fire & Ice (FI) is essentially a combined and revised reprint of two previous scenario packs, 1996’s Jatkosota and 2004’s Finland at War, both of which reflected Ray Tapio’s longstanding interest in Finland in World War II, expanded by throwing in a bunch of other previously published Finnish scenarios.  In 2011-2012, Critical Hit began a frenzy of recycling, reprinting, and renaming its older products, often with countersheets or maps thrown in.  This is one such effort, but is a bit more interesting than many of the others.

The most immediately noticeable (and new) aspect of FI are the four geomorphic mapboards (W1, W2, W3, and W4), and they are noticeable primarily because they are “winterized”–they depict snow covered terrain, with whitish ground, frozen ponds, and so forth.  The boards are actually a pretty good attempt at creating snow-covered boards, which is something that some ASLers have requested for some time.  Even the new style of woods artwork, which was somewhat to fairly annoying in Brave But Doomed and Digger Pack I, looks better on these maps.   W1 has a sparse village on one half and fairly wooded wilderness terrain on the other half.  W2, a wilderness board, has one half that is heavily wooded and another half that is a mix of woods and open ground.  W3 is more open, with some low hills and a number of orchards, in addition to a large frozen pond.  W4 represents a larger village, with a number of tree-lined roads.  In the previous batch of CH reprints, their new geomorphic boards had mis-sized hexgrids which were particularly irritating, but the maps of this product’s batch seem to have been fixed.  They are pretty nice maps.  The one large overlay is a shallow valley with a lot of orchards.

The countersheet (of which there are two copies) mostly provides duplicates of already-existing Finnish and Soviet MMC/SMC counters.  To represent Finns fighting beyond their national borders, the countersheet also includes some 5-4-8 and 4-4-7 Finnish squads.  Some additional vehicles (like captured Soviet vehicles in Finnish service, pulkkas, and aerosleds) are also included.  One interesting feature is that some of the Finnish counters (both MMC and SMC) come in “winter camouflage” flavor (a concept probably borrowed from Kampfgruppe Scherer: The Shield of Cholm).  According to the rules, the Soviet counters are also supposed to be in “winter uniforms,” but this is not distinguishable and they look like any other Soviet counters.

Of the 25 scenarios (for particulars, see below table), 10 are the scenarios of Finland at War, while only 2 come from Jatkosota.  Another 8 were previously printed elsewhere, and 3 of them may be printed here for the first time.  Note that the 8 alluded to above have all been changed by having their maps swapped out for the new maps included in this product and thus may play quite differently from the originals (no playtesters are listed, so it is not clear if these new versions were playtested).  Two of the possibly new scenarios also use the new boards.

This product represents the single largest Finnish-related ASL publication to date, so fans of Finns may fork up some finnifs for this feature.

2015 Note:  In 2015, Critical Hit released a new product, Betrayed by General Winter, which contained 8 of the above scenarios rejiggered for Critical Hit’s “Sweet 16” alternative geoboards, and included one new geoboard.  It is not worth getting. 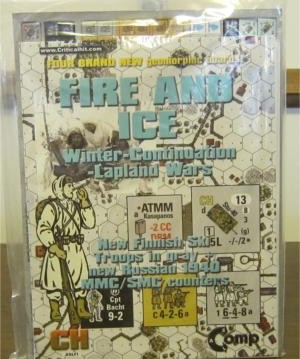