The Sweet 16 Geo Board Collection Winter (16W) is a collection of winterized versions of the geoboards that were featured in the Sweet 16 Geo Board & Scenario Collection.  Before continuing here, it may be worth reading the Desperation Morale write-up of that product, which received a Desperation Morale CONSUMER ALERT warning.  It should be noted that, unlike that earlier product, this product contains no scenarios at all, original or recycled.  It has only maps (and a few bridge overlays).

What 16W does is simply take the geoboard designs from the earlier product and “winterize” them–i.e., keeping the same layout and design but replacing the graphics with a greytone-ish version designed to evoke snow-covered ground, frozen water obstacles, and the like.

The graphics of the 16W boards will be discussed below.  In terms of physical quality, the 16W geoboards represent a depressing trend/development with Critical Hit (how many times over the years have variants of that sentence been typed?), one that began with the original Sweet 16 collection and has extended to every geoboard issued by Critical Hit since then (up to the point of this writing).  In short, these boards are neither mounted boards like the original SL/ASL boards, nor are they unmounted ASLSK-style boards on thin cardboard.  Rather, these are “do-it-yourself” geoboard assembly kits.  What this product actually contains–and, with the exception of some bridge overlays, ALL it contains–is 32 9″ x 12″ sheets of thick paper (equivalent in thickness to the sheets that official overlays are printed on), upon each of which is printed half of a map (i.e., an 8″ x 11″ map section).  There is a white strip surrounding the entire map image, just as if it were a large overlay.  Thus players must use scissors or a rotary cutter to trim away all four sides of each of the 32 sheets of paper–an irritating task.  Even then, the maps are only on paper, not even the thin cardboard of ASLSK-style maps.  This is about the cheapest way to produce an ASL geoboard and no ASLer should be happy or satisfied with the physical quality of these maps.

If that weren’t enough, the maps have other issues.  First, along their narrow width, they are about 1/16″ to 1/8″ too short (in other words, they are just shy of 8″ instead of being 8″ wide).  All their “new-style” paper geoboards, from whatever product, seem to have this problem.  This makes it impossible to line up cleanly with official geoboards (or any properly sized geoboards).  “Luckily,” this is less important for the 16W geoboards, as because of their “winterized” status, they are only likely to used lined up against other “winterized” boards (after all, what is the point of mixing “winterized” and “summerized” boards?).

The second issue with the 16W geoboards was also a problem with the “summer” version of the Sweet 16 collection:  the maps have flawed building graphic depictions.  Essentially, buildings on these maps look fine as long as their sides are lined up purely vertically or horizontally.  However, whenever the edge of a building is arranged at some angle (which happens all the time, of course), the building graphics appear crude, jagged and pixelated.  This made a number of the original Sweet 16 geoboards look amateurish, crude and ugly.  Well, guess what:  Critical Hit made no effort to correct the problem with the “winterized” version of the maps.  Consequently, the more buildings that geoboards have on them, the worse they look.

So, here’s the deal.  Leaving aside the small strips of bridge overlays, what you get when you purchase this product is 32 sheets of paper from which you must cut out half-map sections in order to arrive at a collection of 16 paper-printed, mis-sized geoboards with bad building graphics that are nothing but derivative “variants” of official ASL maps you almost certainly already own.  Oh, and they have “winterized” graphics.  For these 32 sheets of paper, Critical Hit charges $99.95.  Yes, that’s right, a hundred bucks for 32 sheets of colored paper (you can find them from on-line retailers as low as $79.95 or so).  Now, keep in mind that there are no scenarios, rules, counters, etc.  Just 32 sheets of paper.  A hundred bucks.  For that amount of money, plus gas, I will drive to your house and dump actual snow on your old ASL maps.

Overall, the graphic look is good, though not as good as the “winterized” graphics of Kampfgruppe Scherer, largely because that product had a better basic textures and, overall, more attention to detail (such as snow-speckled roads).  Critical Hit’s basic snow-covered ground look does seem to be textured, but it is such a faint texture that to most players it will simply seem to be light grey.  Any such texture does need to be a weak texture, but Critical Hit’s is perhaps a bit too faint.  Higher elevations are rendered in grayscale, with darker being higher (it is not clear if there is any texture on these hexes or not); generally speaking, it works well.

The road network does not work as well, perhaps because it is too much of a contrast with the snow-covered terrain that borders the road; in some maps, the roads seem to crudely overlay the ground terrain.  Oddly, the road graphics are not consistent from one 16W map to the next; with some maps the roads are darker, thicker and more jagged/pixelated, while with others the roads are crudely feathered.  There actually seem to be four or five entirely different sets of road graphics in the 16W maps.  Based on one map that contains two sets, it seems as if two of the graphic styles are supposed to represent paved roads while the others are supposed to represent unpaved roads but inattention to detail resulted in multiple versions of each.  Unfortunately, the best-looking styles appear on only a couple of maps; the majority of the maps have really ugly roads.  It should be noted that Fire & Ice contains really excellent snow-covered road graphics–on a par with Kampfgruppe Scherer–so it is not at all clear why (other than haste and lack of caring) those graphics were not used here as well.  Some of the Critical Hit historical modules with “winterized” maps also have better road graphics.  However, consistency has never been a strength (or even a concern) for Critical Hit.

The woods graphics are okay; they seem to have a bit less detail (such as shadows) than Fire & Ice.  The orchards are just dark grey blobs (as opposed to the more detailed versions that appear in other Critical Hit “winterized” map renderings).  Brush is just a gray version of regular brush; the same goes for marsh.  Gullies retain their green outline, oddly.  Water obstacles have a special texture designed to evoke a frozen surface and this is actually the most attractive and effective graphic element of the winterized boards.

If it weren’t for the jagged buildings and the bad road depictions, the winterized graphics would be pretty evocative.  However, those elements are distracting enough to render the overall effect merely adequate.  The graphics of the Fire & Ice geoboards are simply better.

The poor physical quality of the maps (paper, assembly required), the significant graphics problems, the derivative nature of the maps, and the extremely high price combine to require that this product be given a Desperation Morale CONSUMER ALERT warning and a DO NOT BUY recommendation. 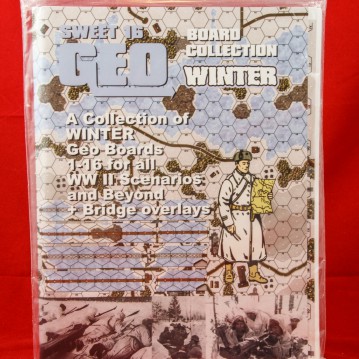