The Sweet 16 Geo Board is a collection of 16 geomorphic mapboards and 16 scenarios.  At first, such a product might sound enticing.  Alas, it should entice nobody at all.  This product has a number of problems with it that make it very hard to justify purchasing it.

Let’s start with the maps.  These 16 geomorphic mapboards are not original boards.  Rather, they are deliberately derivative boards designed to resemble and substitute for, but not duplicate, “official” Boards 1-16.

How closely do the CH boards resemble the official boards?  Resemblance varies from board to board but ranges from little to moderate difference.  In every case, the CH board has the same general layout and nature of the official board, but the specifics, such as terrain shapes or placement, will vary to differing degrees.  In most cases it only takes a glance to figure out which official board any derivative board was based on.

Why publish a set of boards that are almost literally “more of the same”?  To the extent that there is a logical rationale behind it, it seems to be the notion that perhaps some veteran players are tired of the old boards and might be interested in trying their old scenarios on these “variant” boards.  To a certain degree, this train of thought has a point; board 10, for example, has certainly been overused.  But it is typically scenario designers who tire of boards before players do.  Moreover, these boards are, by design, still designed to resemble the original boards, so it is hard to see how much variety they truly can offer–not to mention that any scenarios would not have been playtested for these boards, either.  Is there really an audience for this?  It is not at all clear that there is.

But let us assume, for the moment, that these boards are a good idea and there really is an audience for them.  Anybody to whom the concept of these boards might appeal is unfortunately going to be mightily disappointed by the reality.  First, let’s address the price.  These 16 boards (plus the PTO1 board and the scenarios, admittedly, but they don’t really matter) currently sell from Critical Hit for $158.40, which is a huge amount.  The cost per variant board is almost $10 per board!  One can contrast this with MMP’s “ASL Map Bundle,” currently being offered for $240.  This bundle contains 57 maps, for a per map cost of $4.21, less than half of what Critical Hit is charging.  [Note:  Critical Hit lowered the price shortly after publication, as it usually does after it has gotten all the buyers it thinks it will get at the highest price, but that lower price was still an outrageous $99.95]

But wait, there’s more.  Or less.  Or however one might put it.  The CH deal turns out to be far worse than even the per map cost suggests.  You see, the MMP “official” maps are 8″ x 22″ unmounted geomorphic maps printed on cardboard.  The CH maps are printed on overlay-style paper (not cardboard) as 32 8″ x 11″ half maps.  That itself is not the problem–some people actually prefer half maps to whole maps.  The problem is that Critical Hit did not actually bother to print and cut the maps the way you would think they would.  Although their marketing language nowhere explains this, their half maps are actually printed on 9.5″ x 12″ cardstock, leaving a big white border around all 32 half-maps.   Players are actually going to have to use scissors, a razor blade or rotary cutters to cut out all 32 half-maps.  This task will not be made any easier by the fact that the map graphics extend beyond the hexgrids, making it difficult, especially along the narrow ends, to know exactly where to cut.  In essence, players have to assemble their own maps–it is a map kit more than a map collection.

It also appears that these maps are slightly too short on their narrow end, coming in shy of 8″ by 1/16″ to 1/8″ of an inch, meaning that they will not line up right with correctly-sized boards.

If that were all, there still might be some people somewhere somehow thinking they had gotten a reasonable deal from this product.  But that isn’t all.  Somehow, the building graphics on all of the maps are screwed up.  When a building image appears on the map lined up along straight vertical and horizontal (i.e., parallel to map edges), there are no problems; the buildings seem normal.  However, every building that is rendered at any other angle–which, as it turns out, is probably the majority of the buildings on these maps, what seems to be some sort of software glitch screws up the rendering such that the buildings appear very crudely pixelated, making them weird-looking and ugly, as if they were refugees from some sort of 8-bit or 16-bit computer gaming console.  It affects basically every board, but 6 boards in particular look bad because they have so many buildings.  Moreover, the results are very hard to miss, which brings up a serious quality control question.

The bottom line on these maps, then, is this:  1) they aren’t truly original but rather essentially derivative maps designed to emulate other boards; 2) they are overpriced; 3) they must be laboriously cut out and assembled; and 4) even when so assembled they will look ugly because of the building graphics problem.

The Sweet 16 also contains 16 scenarios, but none of them are original.  They are all reprint scenarios hastily adapted to the variant boards.  It seems unlikely that any of them were playtested with the new boards.  It also seems likely that most ASLers would probably actually prefer to play these scenarios the way their designers had intended, on the boards they had intended.  Even leaving that aside, the scenarios don’t really add anything to the product because any player could “adapt” any scenario to the new boards just as Critical Hit did, without having to buy the scenario over again.  Scroll down for a list of the scenarios.

One has to admit that this product seems like a rip-off.  it is significantly overpriced, while it offers nothing truly new and even what it does offer is flawed both physically and graphically.  ASLers should stay away from this product and send a signal to Critical Hit that they as consumers deserve better treatment. 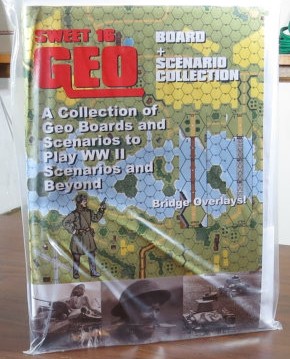