Coming out after a long delay, Kampfgruppe Peiper II made up for the some of the shortcomings of the first module, although it had the same counter registration problems.  It had more scenarios than the first module, though, with 6, still not many.

KGP2 offers the small campaign game KGP CG II (The Bridge at Cheneux); with only four campaign dates, it is one of the smaller and more playable official campaign games.  It also contains KGP CGIII (Decision at La Gleize), a larger 13-date campaign game.  The two campaign games use different map groups; they do not take place on the same terrain.  Unfortunately, the two KGP2 campaign games are not as balanced as the Stoumont campaign game in KGP1, nor considered as much fun.

In addition to the campaign games, KGP2 contains a monster scenario for the La Gleize map, KGP11 (Beast at Bay), which can allow people to experience some significant Bulge playtime, complete with heavy metal, without investing in a whole campaign game. 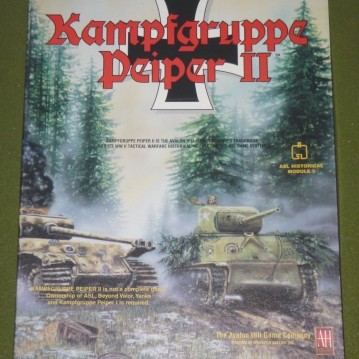