European designer Philippe Leonard and his cohorts provided the second HASL module, Kampfgruppe Peiper I (KGP1) which takes ASLers to the forests of the Ardennes in 1944, where American paratroopers must do battle with the tanks of an SS panzer division.

Two interesting mapsheets (though with smaller hexes than in Red Barricades, which many people do not like) depict the hills and forests of the Ardennes in the area of Stoumont.   Special rules introduced a number of terrain types that would see frequent subsequent use in ASL, including slope hexsides, barbed-wire fences, and narrow village streets.

KGP1 also includes a campaign game, CG1 (Clash at Stoumont).  With 8 campaign dates and smaller forces than in Red Barricades, it offered an alternative in scope and created a very different feel of play from the original HASL module.  It is considered quite balanced and fun.  Of the scenarios, KGP1 (Shadows of Death) is not very balanced, but the other three are.

Unfortunately, Kampfgruppe Peiper has never enjoyed the popularity of its predecessor, Red Barricades.  For one thing, the module itself was split in two (Kampfgruppe Peiper II was released subsequently), which was frustrating for many ASLers.  Others did not feel the module, which had only four scenarios, offered sufficient value (nor did any scenarios use a significant portion of the historical map).  The counters that came with the game also had problems.  The printing on many countersheets was somewhat off-kilter, and the German counters were oddly-colored, resulting in the infamous “purple” Germans.  And for many ASLers, the historical situation represented was not the best (especially the thick mist which pervaded the battlefield). 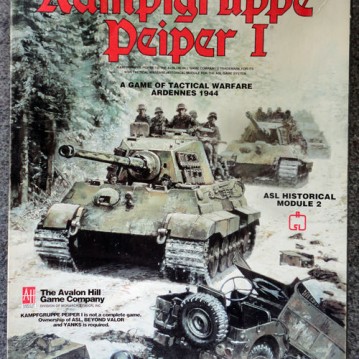